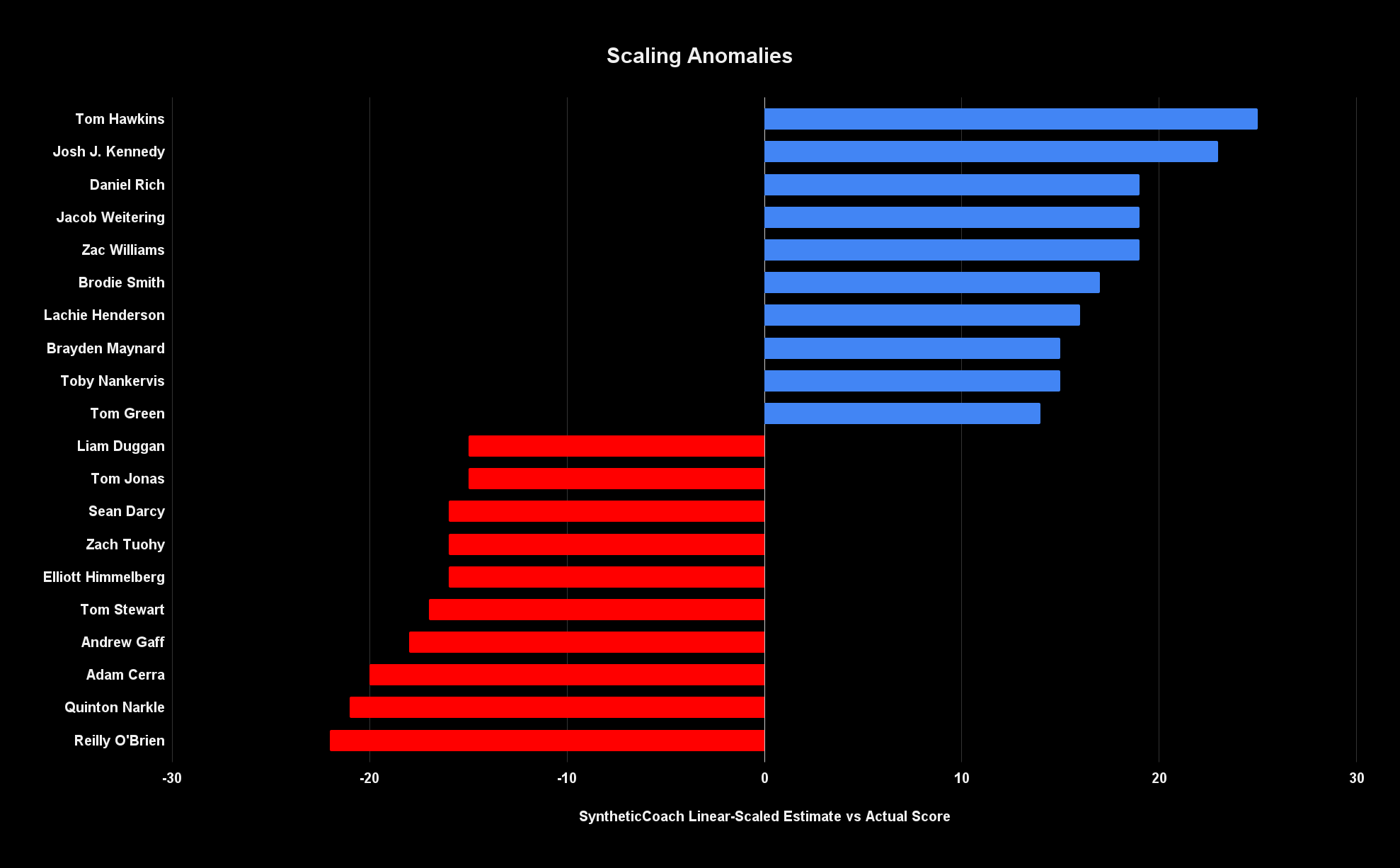 So, I’ve been trying to use the quarter-by-quarter scores that I can now generate to try and work out once and for all what’s behind those blue and red lines in the above chart.

I decided I would start by trying to manually apply weightings, to get a feel for what works and what doesn’t, before I try and automate that part of it.

I’ve done this before, seemingly with some success, with individual player scores – how much harder could it be to do it for a whole two teams?

First, I tried the Adelaide vs Hawthorn game, which I picked out at random. Here’s how the game went:

No matter what I did, I couldn’t seem to get the weightings to work. Making one player’s score less wrong would make an other’s more so. I then decided that I’d perhaps picked out a tricky game – there are multiple points in the above timeline which could be viewed as the game being ‘on the line’, so I thought I’d try a more straightforward one: Brisbane vs Gold Coast:

This didn’t go much better.

It turns out that although it’s easy enough to get two players’ scores to line up by tweaking quarter-by-quarter weightings, it’s a lot harder to get it to work for all the players in a match.

There appears to be something else going on that I haven’t accounted for.

It then occurred to me that since CD does some in-game scaling throughout each match (so that people don’t start complaining when their guy gets scaled down from 200 to 130 at the end – as regular readers of this column will no doubt be aware, the allocation of raw points in each match is way over 3300). I have a strong recollection of reading something, somewhere about each quarter being initially scaled to around 750 points, but a quick search online couldn’t find anything about this.

750 points per quarter would mean 3000 for the match, leaving around 300 points available for ‘bonus’ allocation based on whenever the game was on the line. This fits quite well with the normal (non-time-based) SyntheticCoach scores, where the sum of all absolute errors, for Round 19 at least, was about 7.6 percent of the total scaled points (3300 x 9 games) given out.

Doing this for the Lions/Suns match definitely seemed to push things in the right direction – the mean absolute error, or how wrong each score was on average, stayed at around 6, but it was a smaller group of outliers blowing that out.

I still can’t seem to get those extra 300-odd points to go where they’re meant to, though. I’ll keep plugging away, but the mystery of SuperCoach scoring has not been solved this week.

If anyone wants to have a go at trying to make the weightings work, the quarter-by-quarter scores are once again available in a spreadsheet at the bottom of this post, along with the usual breakdown and summary sheets.

Raw: SuperCoach points, added up according to the formula put out by Champion Data, before any scaling.

Linear-Scaled: Raw points, multiplied by a multiplier (3300 / total raw points for the match) to get the scores in each game to add up to 3300.

Diff: Difference between actual and linear-scaled points. In practice, this is how favourably or unfavourably a player was scaled – this is ultimately what I’m setting out to investigate.

4 thoughts on “Scoring Anomalies – Round 19”