Alright, so I burnt the midnight oil to tabulate the results as soon as possible and get us a declared winner by the morning. Here’s a quick snap of my dining room table having crunched the numbers: 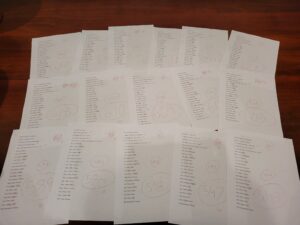 And from that we have a winner…

Make it a triple, it’s The Death Adder! Claiming his 3rd SCT Brownlow Comp win TDA had to fend off Hazzaree and Catta (eyeing his fourth win) who ended up trailing by 7 and 15 points respectively. It was always going to come down to the three of them as they were the only ones who net a maximum 100 points from the 1st, 2nd, 3rd part of the competition; all having Wines, Bont and Satan as their HVGs. Although Alza did mount an honorable charge in 4th it was always going to be an uphill battle without Bont in his Top 3.

We’ll get a few more individual results and a wrap, but here’s the full scoreboard:

A lower turnout than usual for our Brownlow Comp but a really tight finish and a strong showing from the cohort overall. With TDA, Hazzaree and Catta unassailable after nailing the Top 3 HVGs and the rest of us mostly getting 2 out of the 3, the rest of the leaderboard came down to the Team Top 2s.

Port, St Kilda, Swans, Melbourne, Essendon, Freo, Suns and the Dogs were pretty easy to get a read on but a few teams proved hard to navigate.

GWS stumped everyone, with the alluring Kelly and Greene combo getting comfortably put away by Hopper and Taranto – which in hindsight now seems like the obvious duo given their continuity in the side.

Carlton’s second highest poller, McKay, was also tricky to pin down with Weitering, Cripps and Curnow popular options. Only Nateo, Sal, Chillo and Jason clued in to that one. Nice work, fellas.

With big bags always reliable for votes, a few also had Riedwolt for a handy +8 to their totals. The same logic nearly repeated itself for Tex were it not for a late 2 votes to Keays for his 173 performance against the Roos.

With the #1 vote getter for each team pretty intuitive, it was the #2 that proved difficult throughout the evening. Adams and Simpkin suckered most of us in, with no one getting Crisp or Thomas, the Zorko or McCluggage debate for second fiddle at the Lions was split down the middle and the hail mary some threw on Wingard bombed.

To a few individual performances, starting with last year’s bottom of the leaderboard finisher: Wighty. Channelling the spirit of 84′, Wighty bounced back with some solid predictions to land in 5th with 621. Late in the write up, I noticed Wighty also notched up a clean sweep in the Top 3 HVGs but did himself no favours missing Cunnington and Anderson and taking a flyer on Ellis. Pipping Taranto kept him competitive though. Great stuff.

2018 Competition winner and site stalwart Lisa took informed punts on Weitering (same), Swallow, Ziebell and Sinclair to no avail. Could have easily paid off  had the umpires looked beyond the midfield, Lisa.

Alza tallied the most points from the team Top 2 predictions with a huge 544 and 30/36 correct! Nearly brought it home for the admins but had Steele in ahead of Bont as a Top 3 HVG.

Shout out to Bruce, who despite coming in last place with 527, was the only one to nab both Selwood and Hopper. Although don’t feel too bad for Bruce…he’s been drowning in silverware in recent years as a Tigers man!

Anyway, that’ll do it. Congratulations to TDA for the treble, excellent work! Cheers to everyone who got involved as well, it made the farcical count last night much more digestible.

Looking ahead we’ll have the Grand Final Day match chat up, then SC BBL and Racing content and leagues to come, Punters Club through the summer and General Discussion and Trade Period threads pinned to the top of the site. Catch you all on the other side, take care.