It’s no secret that Patrick Cripps’ SuperCoach output has been dropping, while his young teammate Sam Walsh’s numbers have simultaneously been rising.

Could these be linked?

Going from left to right, their combined scores have certainly started to fall into a tighter range than they used to: 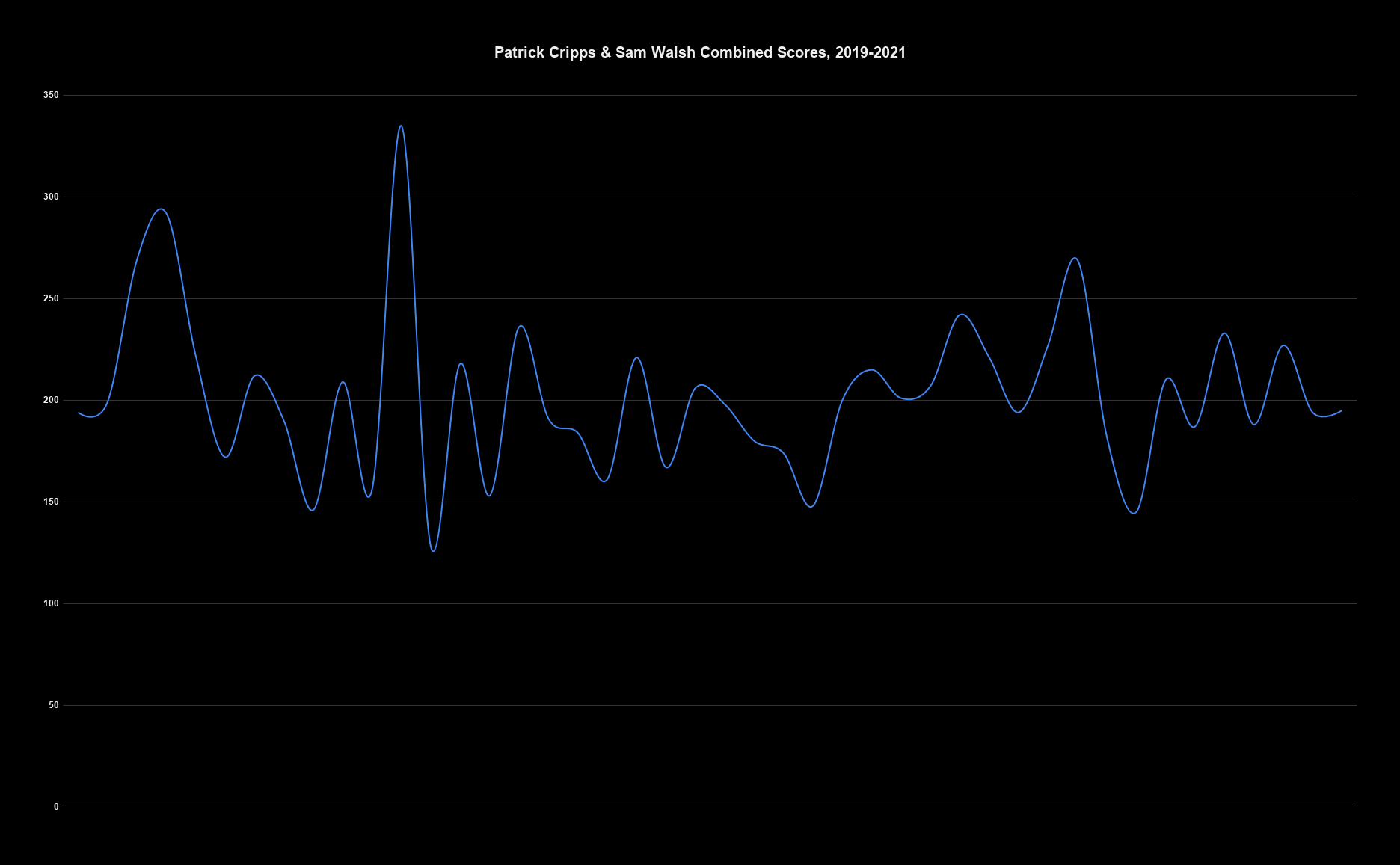 Still, this doesn’t tell us that much – the above could just be a coincidence, with Cripps and Walsh’s output moving independently of one another. We’ll have to dig a little deeper.

A couple of weeks ago, I shared this: 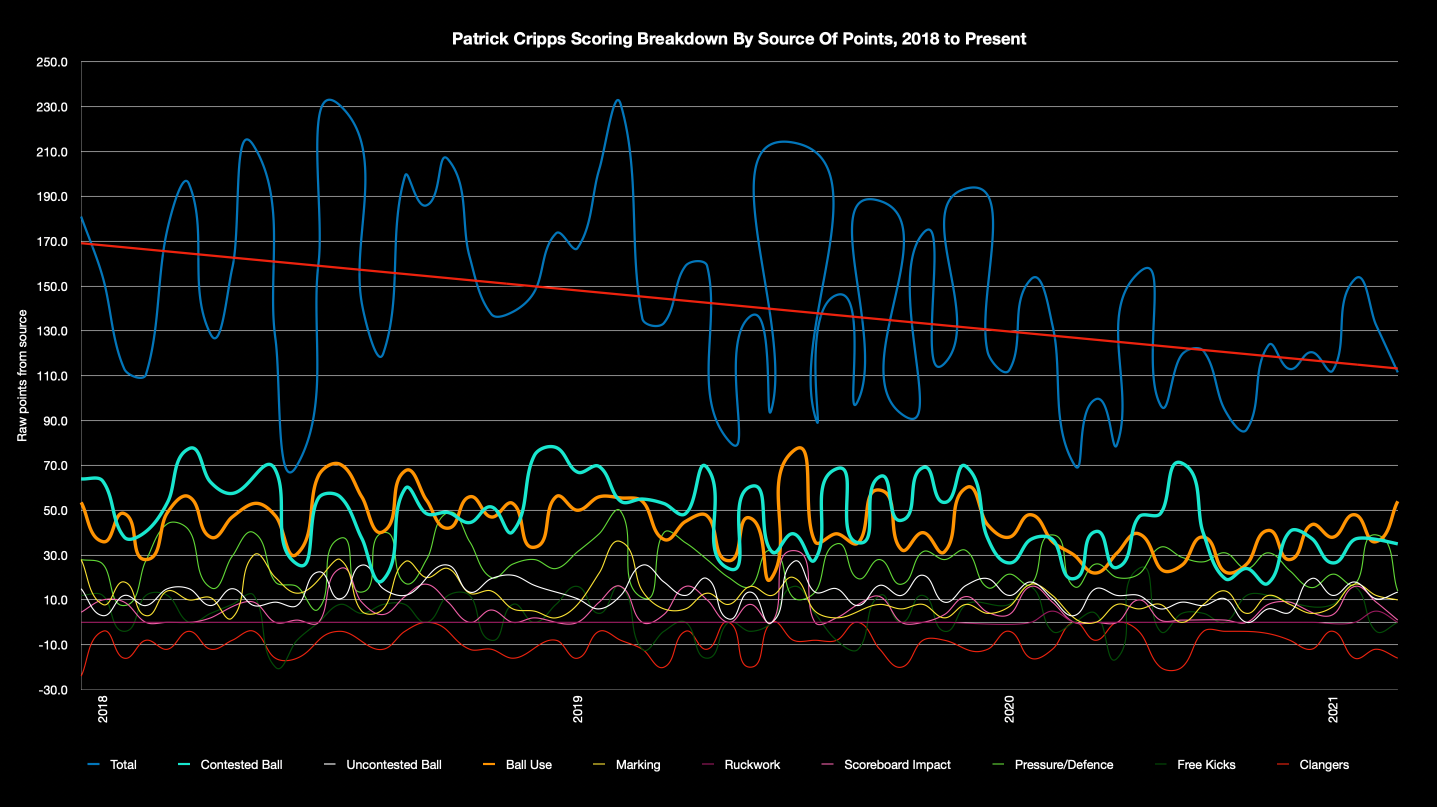 And concluded that his drop-off in contested ball-winning was a major driving factor in his reduced SuperCoach output. What have Walsh’s numbers looked like over that time? 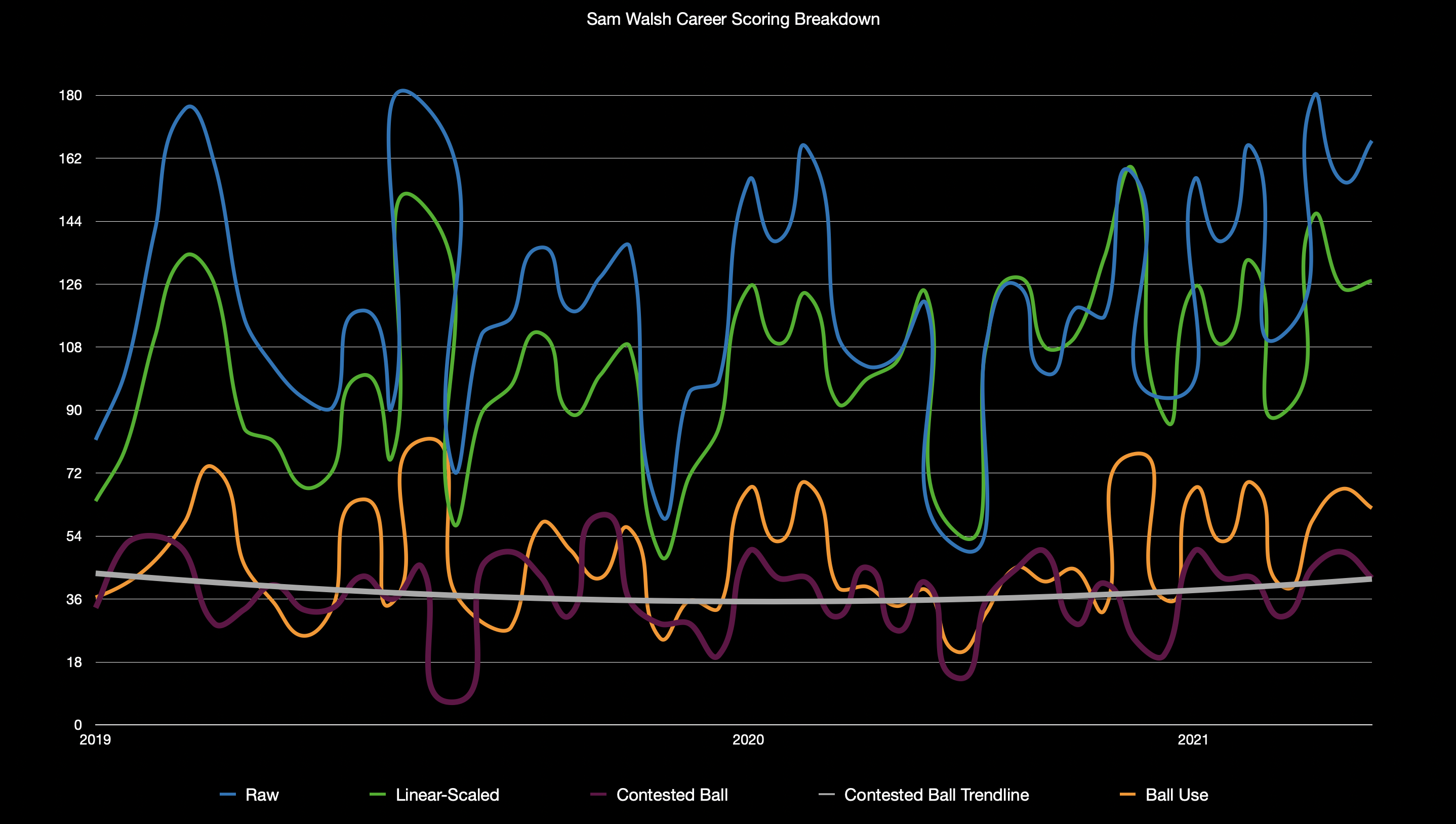 I’ve deleted most of the point sources from the chart, so we can focus on what most interests us here: contested ball.

Although his numbers for that category are becoming a bit more consistent, they’re not dramatically higher than they were in 2019 (the drop in 2020 is just the shorter quarters).

If we look at his averages for each category, we see that he’s overall a pretty similar type of player to the one he was back in 2019, just better: 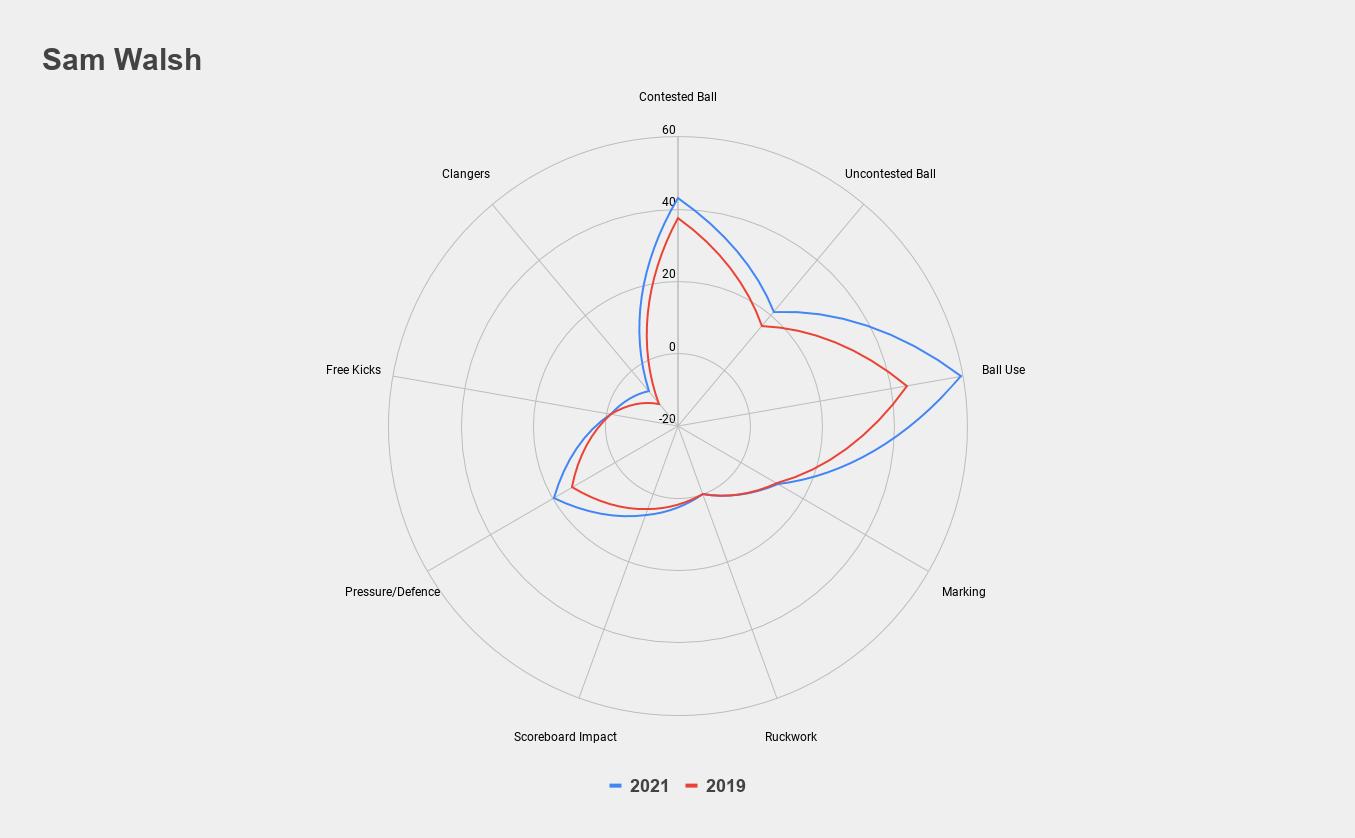 Doing the same for Cripps is quite revealing: 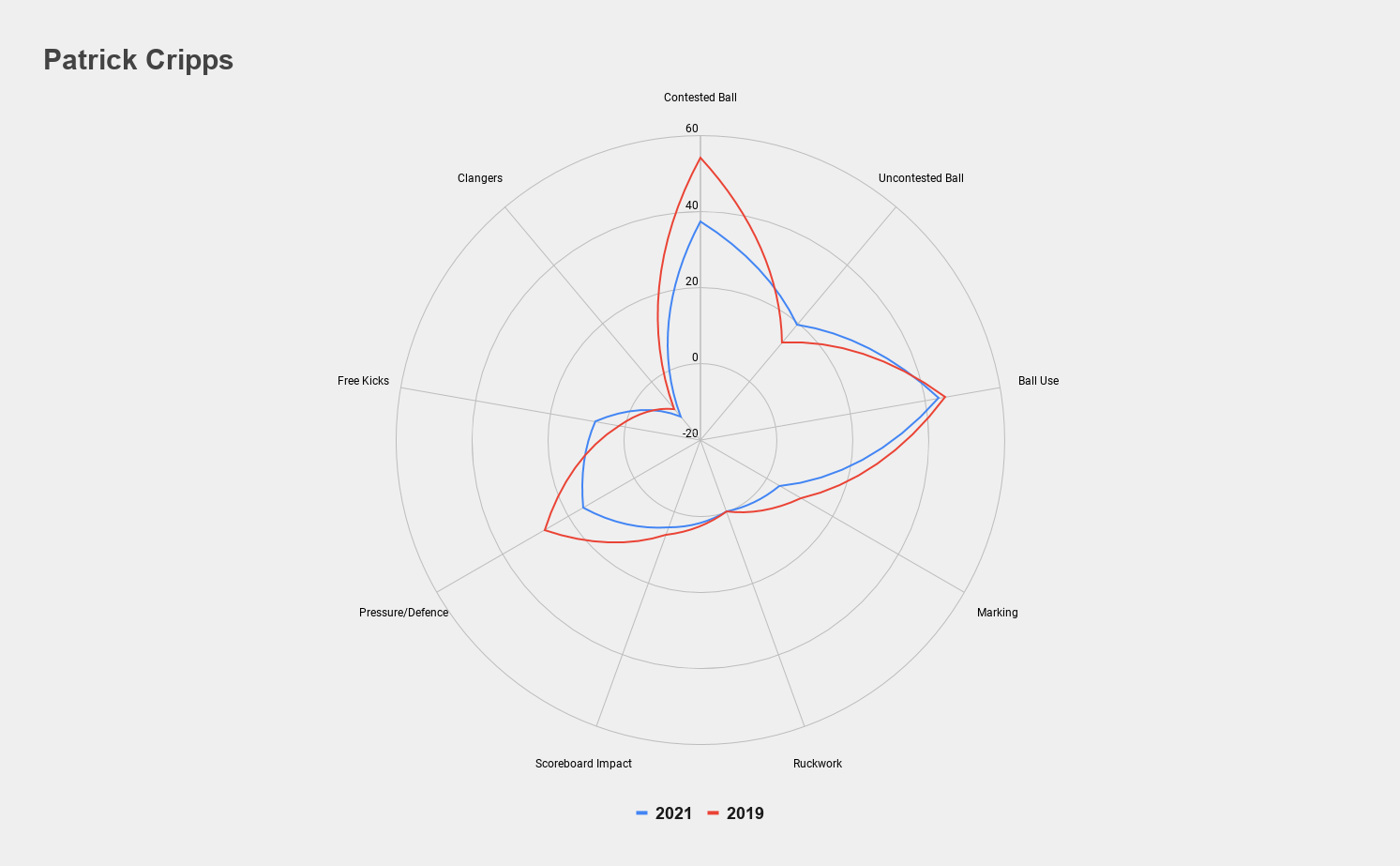 Apart from the big drop off in contested ball, his pressure/defence stats are also way down. That could be due to Carlton having the ball more often nowadays (no need to tackle if the opposition doesn’t have possession), but it’s also possible that he’s avoiding tackling because he’s still carrying an injury the Blues aren’t telling us about.

Anyway, although I still think the theory of Carlton having a more even midfield spread hurting Cripps’ output has merit, I don’t think we can point specifically to Sam Walsh for that.

Whatever the reason, though, Cripps is far too good a player to keep scoring the way he has been, so he should bounce back sooner or later.

But probably not this week: 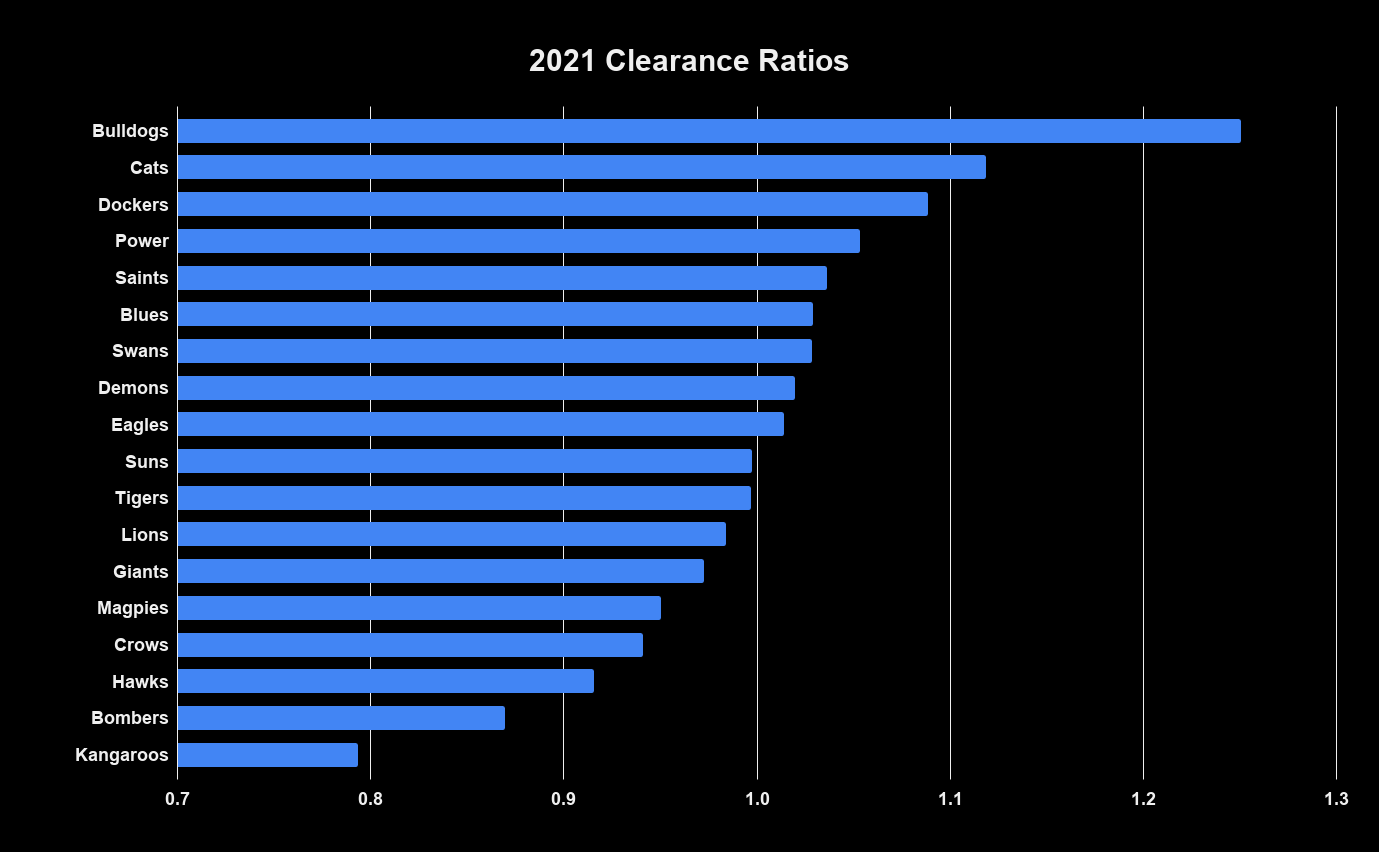 Although there are no SuperCoach points on offer for clearances per se, a team’s ratio of clearances won and lost is probably a decent proxy for “how hard is x team to play against for inside mids?”.

Got any thoughts on Cripps’ fall from SuperCoach grace? Let us know in the comments below!

3 thoughts on “Uncharted Territory – Round 8”