Last year’s constantly shifting and evolving season structure made negotiating the bye rounds a unique challenge, but in 2021 we revert to a more traditional pattern (he says while furiously crossing fingers, toes, eyes, etc). Six teams will share a bye in each of rounds 12, 13 and 14; here’s how they lineup:

All very nice on the face of it, but let’s address the really important question here: how does this translate to Supercoach?

As is usual practice, Supercoach reverts to “best 18” scoring throughout the bye rounds. For those new to the game, that means if for example you have 20 active players during one of the bye rounds (including valid emergencies), then the two lowest player scores will be disregarded in your final total for that round.

Here’s a list of the most popular premiums – and a few midpricers thrown in for good measure – and where their respective bye rounds fall: 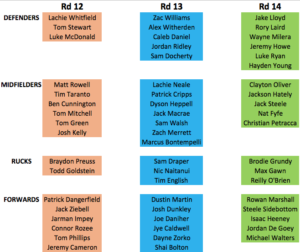 Obviously there is the annual event that is the Gawn-Grundy bye round to deal with in round 14, but at first glance overall it doesn’t seem too bad. The main chance for a banana skin seems to be the midfield in round 13, although defence in round 14 and forwards in round 13 will have to be closely monitored also.

A few passing thoughts/unofficial rules on Surviving the Byes:

Be careful selecting too many players from each of those groups, or try to set up some DPP swings to enable as many active players as possible throughout this time.

Ideally, you want to avoid trading at all in round 12. Anyone you bring in during that round will miss one of the next two weeks, so hold off if you can and rely on your rookies to do their thing. Then trade like crazy in rounds 13 and 14, bringing in players who are fresh off their bye.

This means you probably want to consider staggering your starting premiums with respect to the bye rounds. In terms of rounds 12-13-14, something like a 2-5-6 or 3-4-6 bye arrangement for your premiums is usually the optimum setup. Injuries and player management will play their part of course, but cross that bridge if and when you come to it!

Alternatively, tank one of the bye rounds by loading up on players with the same bye round. It’ll obliterate your score in that particular bye round, but give you a massive leg-up in the other two.

The byes are very much a time of boom or bust when it comes to Supercoach, and should be viewed as a time when you can really make up some ground in the rankings if you do them right. What are your tactics when it comes to the bye rounds?