I’d like to preface by saying; I miss the innocent days where we all made believe that we’d have cheap rookie options this season…

I’ve like many, have had to chop & change regularly. Post AAMI, this is how I’m sitting. R1 selections will most likely throw us all for a curve once again, but until then, ill sit on my hands.

Lloyd and Crisp, self explanatory. Barring injury (both as durable as it get) they’re both locks to be top 6 come season end. Set n Forget with these two. Whitfield and Sicily both associated with risk; however Whitfield has shown that massive ceiling that I just can’t resist @500k, if he also goes large for the first few rounds (ala Dunkley last season), with his high ownership %, it could leave me behind the crowd. Sicily was held accountable against the Tigers in the AAMI PS game. I do expect him to be more often than not in that loose intercept role (especially with Frost & Hartigan to return), however more than likely will have a dynamic role depending on team structure & opposition. @45ok, I still believe him to be a bargain knowing his ceiling, he’s been fit since late last season and if he ends up my D6, It would have been a successful season. Gibcus & Sinn could easily become a combination of Hinge/McCartin (via DPP) depending on availability. SDK getting a gig, gives us all a glimmer of hope, however wouldn’t want him on field. O’Drizzy hopefully gets a gig early.

I’d been debating; Clarry or Miller? After watching Touk with some help & Witts tapping to him, my choice was made for me. Steele & Macrae chose themselves. Fitting both Rowell & Berry in made quite the dilemma. Berry being 100k cheaper made the choice easier. JHF/Daicos/Ward, all guns that will get gametime. Stephens hopefully gets an extended run and makes some coin off the bench. Hollands enables some much needed DPP & MacDonald I’m expecting gets a run early on.

So I’ve got some explaining to do…

Yes I’m the user that was repping Sean Darcy quite religiously. And yes, I’m not starting him. My main concern with Darcy has been his durability, (even though he was on his best Terminator impression late last season). The demise of Gawn has been greatly exaggerated IMO. I’m hoping he gets given DPP in R6, if Darcy is fit n firing, Gawn will be moved forward and Darcy will come home. Grundy? First selection this season. J Hayes / Dixon / Comben / S Hayes – hopefully 2/4 of these start R1…

Dunkley – nothing I can say that hasn’t been said. Butters at F2 – great role, young, shown a huge ceiling and promised more mid time. Lock. Cogs (see Dunkley). Xerri at F4 will be an interesting pick to some. Goldy is 34 years old, North really need to start looking at the future without him and from what I can gather, Xerri should be getting a healthy chunk of the ruck duties. Rachelle & McCartin, both premium rookies that should be in everyone’s teams. Warm bodies need to be paid for. Speaking of, Durdin looks to be fine for R1 and finds himself @F7. 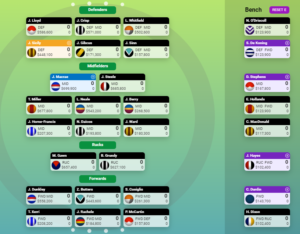 There it is, hopefully everyone has a great season and the SC Gods don’t throw too many leg spinners at us (RIP Warney).

Any constructive criticism? Leave it down below 🙂