What a weekend of football! Popular trade-out options in Stephen Coniglio and, the week prior, Zak Butters both tonned up, as is the way in Supercoach-Land. Sought-after defensive downgrade targets in Buku Khamis and Rory Thompson, both burnt-coaches in their own ways (all the best Rory, you truly deserved a proper crack at it). Matt Rowell, Greg Clark, and Nick Martin, both popular on-field starters for owners, stunk it up. Lachie Whitfield missed due to an ankle injury (hopefully he’s back to his best soon, but boy do I feel bad for coaches that held). And of course, a plethora of coaches traded in Touk Miller for his very handy 59 points (and for those that captained, a minutes silence). So with the negatives come the positives. The Bont and Bailey Smith are all but guaranteed FWD eligibility come next weeks DPP updates. And finally, if staring at your team causes frustration and anger, I implore you, crack open that boost, burn those trades, and do what the heart says feels right! With that, Let’s get to The Fallen-Premiums Round 11! 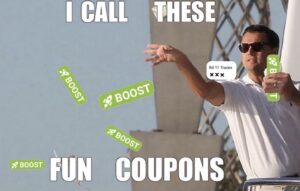 “I’m going to let you in on a little secret about these trade-boosts. They’re not going to activate themselves.” – Jordan Belfort.

Jack “The Ironman” Crisp (COL, 558.9k, (-$12.1k), 105.5 AVG, 122 BE, R14 bye) 173 consecutive games for the Man of Steele! Wait wrong nickname, wrong player, my bad, let’s try again… More durable than the tools in your grandfathers toolbox, Ultra-consistent scoring, with 7 consecutive tons and a 109.3 three-round AVG. For the season, Crisp is averaging 26 disposals (9.5 contested), only 70% efficiency, 511 meters gained, 5 clearances, 6 tackles and a goal every other game. It’s also nice to know exactly what you’re getting with Crisp. Finally, with the round 14 bye, Crisp also offers that extra cover during the byes in round 12 and 13.

Jack Sinclair (STK, 530.2k, (+$60.5k), 110.3 AVG, 67 BE, R12 bye) I know, not a fallen-premium by the textbook definition. However, after his hot start to the season, Sinclair has dropped a total of (-$40.k). Now, I know what owners and potential suitors alike are thinking. Just how sustainable is his scoring? Priced at 530k, Sinclair is insane value. Jack has been playing as a half back who rotates through the midfield this season, which has resulted in some amazing scoring (only having dipped below 100 on two occasions). Has the round 12 bye, but a BE of 67. Could jump on this week and ride the bye saving 20k or so, or wait til Round 13 to upgrade a Paddy McCartin or Sam DeKoning type. 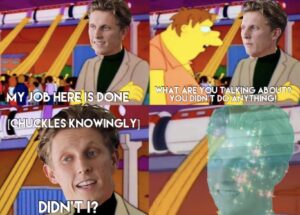 And just as mysteriously as he appeared in our teams. This past round was time he now disappeared from them… 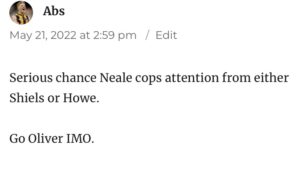 Clayton Oliver (MEL, 659.5k, (-$12.5k), 126.4 AVG, 112 BE, R14 bye) last week I mentioned Clarry and noted something specific. I mentioned that Oliver’s ceiling is just as large as the one shown by Callum Mills this season. With that tidbit of knowledge and up against the Kangaroos, guess who I captained? You bet ya! Rory Laird….. Bravo to those coaches that did ride with Clarry this past weekend, and to the ones that finally brought Satan in. Clarry had a career-high 45 disposals, resulting in 178 points and a gut punch to non-owners. Has the final-bye, is currently below his starting price, is a Brownlow contender, bonafide gun and looks like Chucky from The Rugrats all grown up. Non-owners, bring him in!

Marcus Bontempelli (WBD, 587.5k, (-$64.2k), 112.7 AVG, 91 BE, R13 bye) the term “Bont scaling” was coined for a reason and was on full-display Saturday arvo (I know, I know, he scored 3 goals…) 9 clangers, 4 frees-against, 24 possessions (14 contested), going at 75% DE with 3 goals. This may not scream 130 point game to some, but for those familiar with the questionable scoring Bontempelli has received over the years, this wouldn’t come as a surprise. Anyway, largely going under the radar due to a plethora of Bulldogs options, the Bont has only dipped below 100 points once this season, is averaging 112.7 points and has a three round average of 123.3 points. However, the true appeal of the Bont comes from the impending forward eligibility. All but guaranteed, Bont needs to spend less than 5% of the game against the Eagles parked up front, to be granted DPP and help finish off our forward lines. 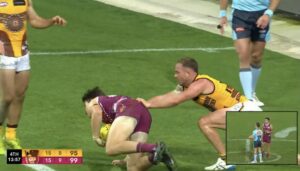 This sort of play wasn’t deemed acceptable even in the the 1980’s.

Tom Mitchell (HAW, 498.5k, (-$139.6k), 95.7 AVG, 125 BE, R14 bye) SC aside, I’m a huge fan of Mitchell and what he’s provided for the Hawks (call him a useless ball-winner, see what happens…. See what happens…) I mentioned a few weeks ago that his relevancy in Supercoach has finally fizzled, gone are the days of locking him in as a Captain. 129 points and . However Titch was only seen at 48.6% of the centre-bounces and was once again at times left at half forward, while Sam Mitchell commits to playing the youngsters through the middle. A flu-effected 40 point game against the Dons has seen the once Super-premium dip below 500k. With the last bye I’ve seen a lot of people keen on Titch at M8, and I’ll once again say it, from what we’ve seen role wise, he isn’t SC relevant until those CBA’s and on-ball time improve. Could take the risk, use him as cover for the first two bye rounds. And worst-case trade him out in round 14 if he under-performs. However, I believe there’s better bang for buck elsewhere and wouldn’t be rushing to bring him in.

Sam Walsh (CAR, 609.2k, (-$27.9k), 116.6 AVG, 77 BE, R12 bye) backed up his performance last week with another solid score. If I was looking at Walsh as a trade-in target, I’d be waiting until after he has his bye next week. Offers a solid premium to help complete your midfield and help cover the round 13 & 14 byes. Walsh once again was only prevalent at 12 centre-bounces, but was just about everywhere else in the Friday night clash with the Swans. 133 points this week, and 149 points last week. At only just 21 years old, in a team fighting for top 4 contention. Walsh is becoming hard to ignore for us non-owners. 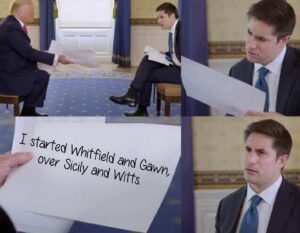 Max Gawn (MEL, 580.4k, (-$77k), 112.6 AVG, 180 BE, R14 bye) a completely preemptive mention here for big Maxy. Rocketing down in price currently and looking to be cherry ripe for picking post-bye for coaches looking to bail from the Preuss-Express. Largely playing forward against the Eagles last week due to an injury concern, and was very inefficient this week against North. Gawn has continued to show that massive ceiling we’ve become accustomed to over the last few years, but has annoyingly been dropping out-of-character sub-tons. His role has largely remained unchanged from last season, with a similar share of ruck duties to 2021. For the small minority, and I know you exist. Do not trade Gawn out of your team.

Luke Parker (SYD, 540.6k, (-$51k), 103.4 AVG, 102 BE, R13 bye) was the talk of the media last week for no good reason IMO. Once again, led the Swans in CBA’s this past weekend with 24! And of course, a handy 26 possessions (only 9 contested) and a goal for 114 points. My personal take is that one of Heeney or Parker should find a place in your forward-line (yes even with the likes of English, Bont, Robbie McComb and Bailey Smith on the horizon). With Parker and the Swans facing the Tigers (who have bled points to opposition midfielders). Parker looks set to be a nice smokey VC option.

Isaac Heeney (SYD, 483.3k, (+$28.8k), 105.7 AVG, 99 BE, R13 bye) much like with Sinclair, Heeney had a monstrous start to the season and has cooled off over the last few weeks. Resulting in a (-$61.2k) reduction from his peak-price. In rounds 8 and 9, Heeney found himself with only 1 CBA and primarily parked up forward. Heeney still scored somewhat respectively due to his contested work those weeks. This past Friday against the Blues, Heeney found himself back playing in the midfield with a handy 15 CBA’s on top of it. If Heeney can continue to maintain a spot in the middle, he’s definitely one to consider after his bye in round 13.