Those of you who have been following my SyntheticCoach project via the Scoring Anomalies column might remember that last week, I introduced a feature that allows me to break down players’ scores by general category, rather than stat-by-stat. You can read up on it here if this is the first you’re hearing of about it, but for the most part, the categories are pretty much what they say on the box.

The advantages of breaking the scores down this way really become apparent when you graph it, so for this week’s edition of Uncharted Territory, I’m focusing exclusively on charts from this source.

Don’t forget that you can always open the images in a new tab if you want to view them at full-size.

Where have Lachie’s points gone?

It’s no secret that Lachie Neale hasn’t had the best start to the year. I was hoping that plotting the average of his raw scores from this year and last would provide answers, but instead, I got something quite unexpected: 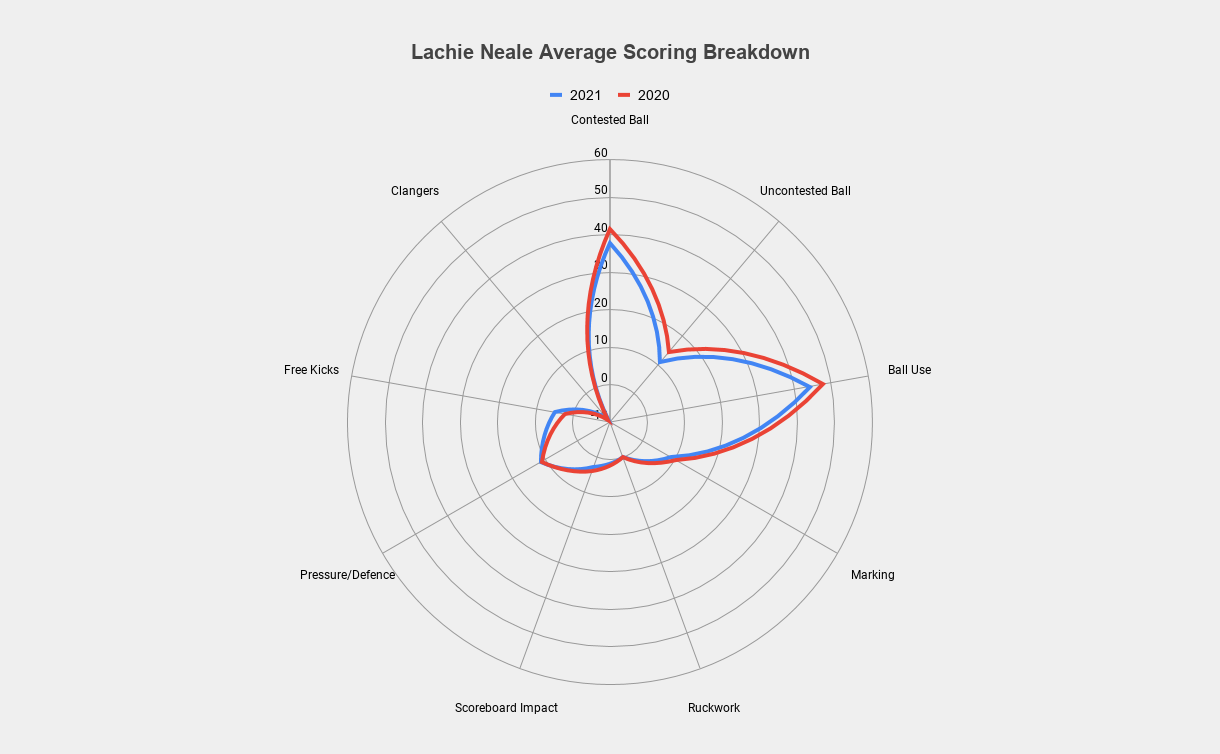 they’re basically the same. He’s a few points a week shy of last year’s standards in each of contested ball, uncontested ball, and ball use, but not enough to explain this year’s shortfall in points. He’s actually averaging only slightly fewer raw points so far this year than he did last year – 112 compared to a 121.5.

Perhaps the biggest difference between this year and last is that last year, scores were, on average, being scaled up, due to the shorter quarters. With the return of 20 minute quarters this season, the general direction of scaling has reverted to going downwards. But that’s an interesting discussion, and set of charts, for another tine.

The silver lining in all of this is that we know Lachie is playing at least somewhat injured. Just how injured, we don’t know, but you can be confident his scores will improve in time. Speaking of improvement, how’s he been coming along so far? 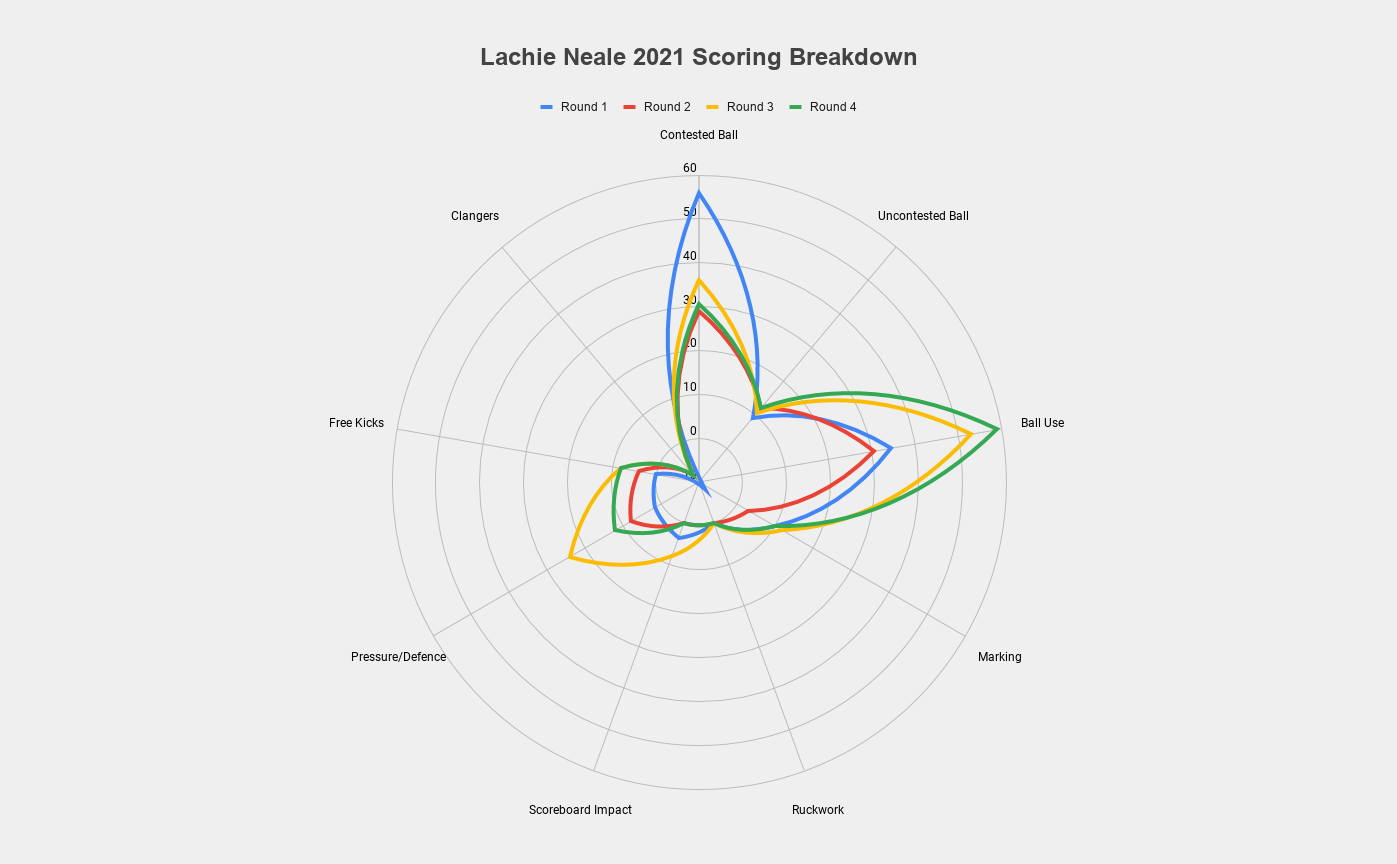 It’s a mixed bag, I’m afraid. His ball use and defensive pressure metrics are heading in the right direction; contested ball, not so much. 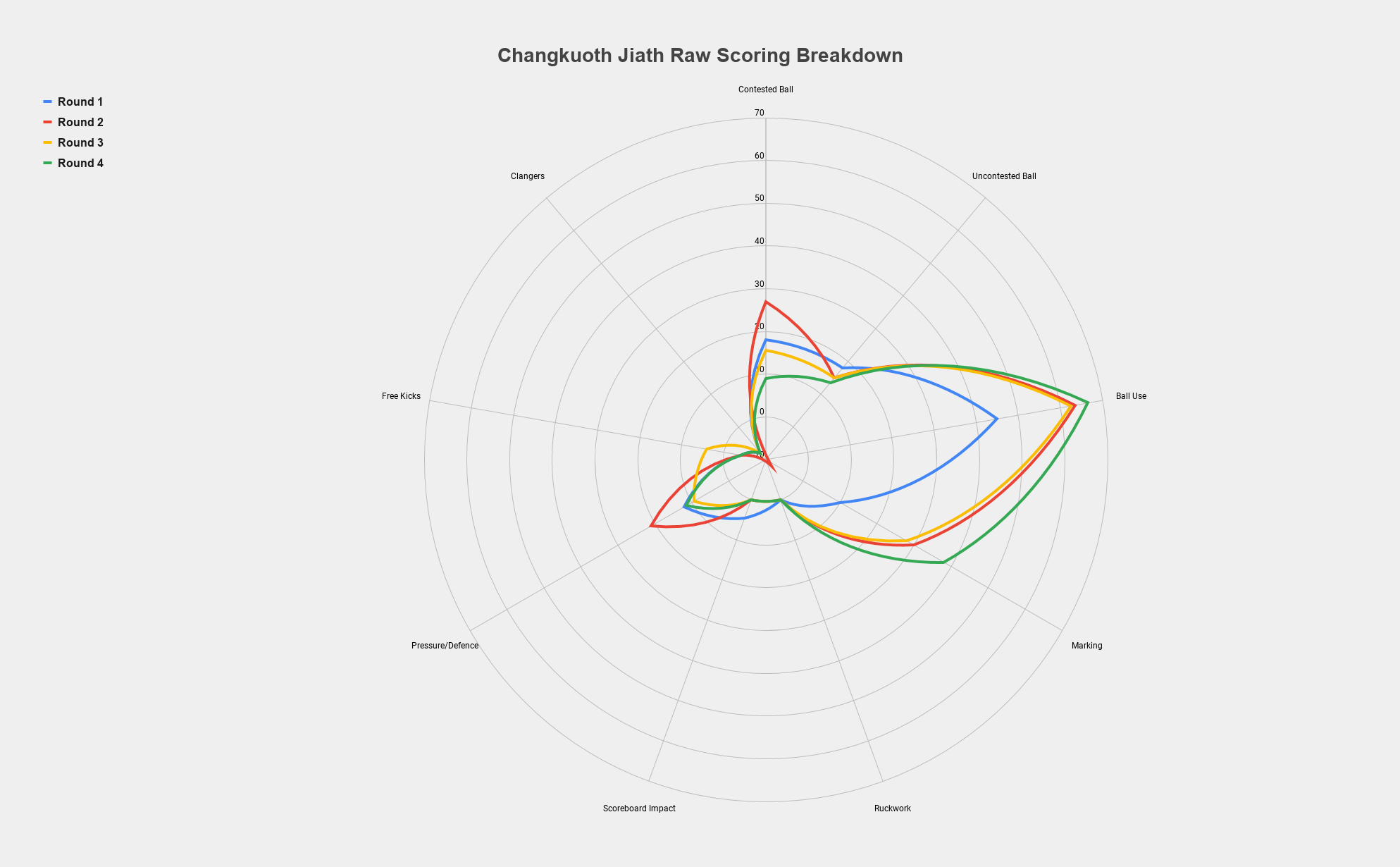 Apart from his marking (just the one intercept mark) and ball movement (handballing instead of kicking) figures in Round 1, CJ’s performances this year have all looked very similar from a SuperCoach standpoint.

2019 notwithstanding, his scoring has always tended to be up-and-down. I can’t necessarily tell you why he can be so inconsistent, but I can at least show you where he gets his points from: 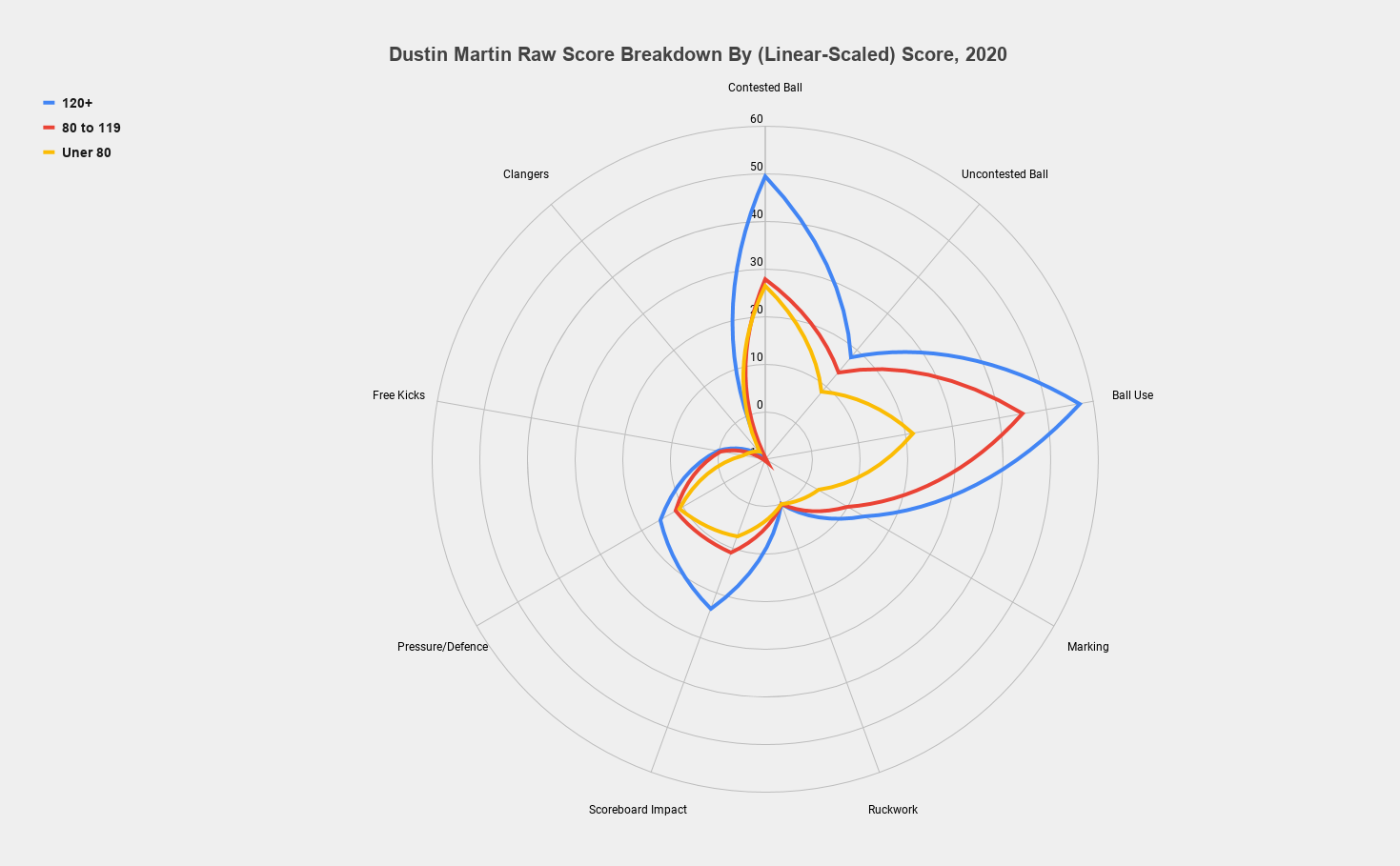 I decided to group his performances by their linear-scaled SyntheticCoach estimate rather than the actual scores, because that eliminates any favourable/unfavourable scaling from the equation, making comparison easier.

As you might expect from watching him play, he gets extra points from good ball use and impacting the scoreboard when he’s going well, but the main driving factor there seems to be that he wins a lot more contested ball than usual in those games.

At the other end of the scale, he tends to get about as much of the ball as usual in his bad games, but ball use is a lot worse.

That’s all I’ve got for you today. What kinds of things would you like to see charted over the coming weeks? Let us know in the comments below!

2 thoughts on “Uncharted Territory – Round 5”