A while back I talked about “Cow-pound interest”, what I call the extra points you need to make up for getting a player later.  Like, if you get someone this week who scores at 100, how  many points would a player brought in next week need to score to have the same point value by the end of the season? That also depends on the score from who plays in their place. With us all, hopefully, finishing up our teams, “wait a week or get someone now” is a hot topic.

So, one week later, not so bad. But, two or three weeks later and it gets hard to score well enough to justify a wait, at least if you are talking about a cow upgrade.

If you are talking about an upgrade of 85 to a 100, then that’s a total improvement of just 135 points, which is barely worth a trade. Very luxury. If you are going, say, 80 to 110, that’s 270 points which is worth a trade. So, whatever you think a trade is worth, divide that by 9 and you get the point difference you need to beat for the trade to be worth it.

Of course, if the points are about the same and the cash of the traded out player goes up and and the traded in player goes down in price, then there is a side benefit to waiting.

A chart for how many points average differences are worth by rounds remaining. Might help figure out if an upgrade is even worth it.

Given how few trades we have and how much of the season is left, I’d want at least 150 points from an upgrade and maybe more depending on how many trades. If you have 2-3, I’m not sure any upgrade other than cow to premo is worth it, and even then only one if you have backups.

Also, in case it is helpful, how many points someone would score at various averages by weeks remaining.

As always, the big thing is to think through any moves. How many points are you going to get from them v having a trade for possible injury? I’m a lot less sure I want to upgrade CCJ, Impey, or Jiath than I was before looking at the numbers. Not saying they shouldn’t be, but it should be a big difference, not a small one.

Nikolas Cox: I guess 37 points is better than no points. 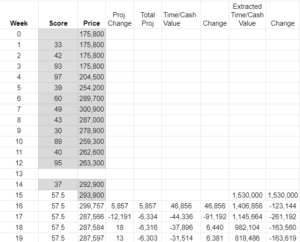 Jack Buckley: Annoying price drop with more drop probable. But, points in R14, so worth the cash. Might be a good one to move on this week. 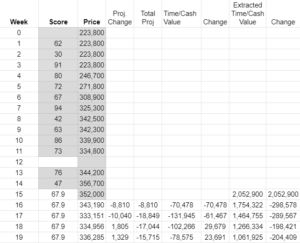 Jacob Koschitzke: Nicely timed 73. Likely to go up a bit over the next few, and again, may just be a good hold as backup, depending on your situation. 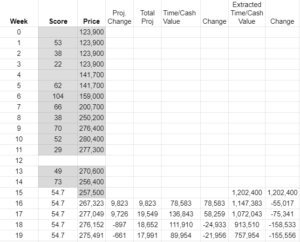 Thomas Highmore:  Did not play

Nathan Murphy: Did not play

Jordan Clark:  Did not play.

Changkuoth Jiath: Did he get hurt mid-game? Started great, and then slowed way down, just 76% TOG.   Still likely to go up in price next round, or next time he plays.  He does look like someone you want to upgrade if possible, but probably not the end of the world to keep, which is the same as he looked a while back. 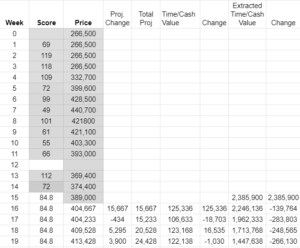 Sam Berry: Did not play

James Jordan: Did not play

Tom Powell:  Hit a high price at his bye, but if he was kept to provide scores over the R13-R14 byes he’s sort of trundling along at a $300k range. One good score and he could go up again. 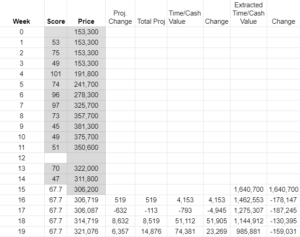 Lachie McNeil: Did not play. Appears to have lost his job.

Riley Collier-Dawkins: Did not play

Ryan Bynes: Did not play

Matt Flynn:   Seems like a pretty safe hold for a week, while waiting for Grundy’s price to come down. (With luck, in one or two weeks.) I am curious to see if he could end up a an ok R2 from here on out, but hope to not have to try it. 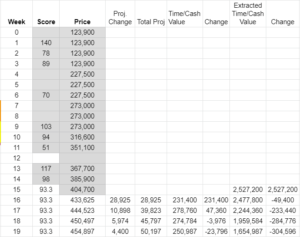 Jordan Sweet:  Did not play.

CCJ:  Showing up early because he’s such a crucial player.  Actually could be a decent F6, as of now, but rookies so often fade after a while. Big huge piles of cash left to make. 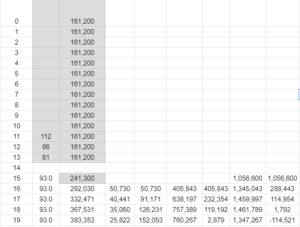 Robertson:   Appears to have topped out. Price will go up and down week to week depending on how he does. Neale back might be hurting him. 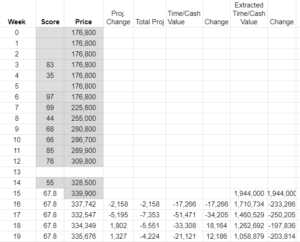 Warner: Did not play

Scott: Has played every game and seems to have a secure job. Price likely to go up some next round. Could well be a good F/M swing backup player. 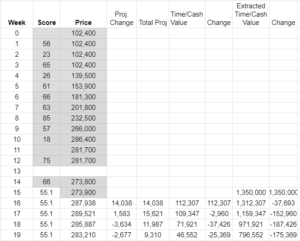 Rowe: Did not play

Bergman: Rule of three time!  Big money over the next two rounds, right as Danger is dropping….. 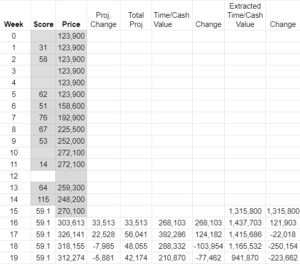 Farar: Did not play

Owies: More slow cash, maybe not much more though 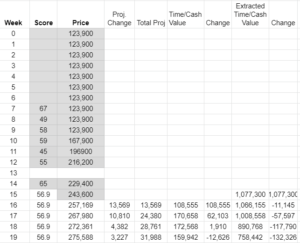 Poulter: Did not play

Jones: Rule of three again! Hold for two, trade in for cash. 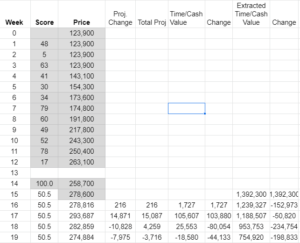 Madden:  Played! Scored decently, has money to make if he keeps his spot. 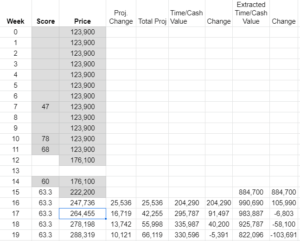 Weightman:  Seems secure in the team, and has a fair amount of money left to make. 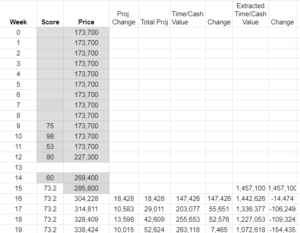 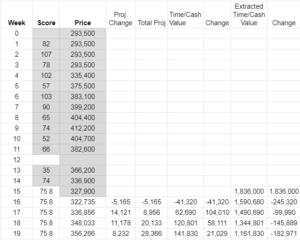 Daniher: Not the best score, but he’ll have games like that. Not a lot of reason to hold if you don’t have to, but lots may have to.

(Please let me know if someone is missing or if something is messed up.)

Dodgy Advice:  If you have Flynn, is he really worth upgrading to Grundy? Well, yeah, actually, unless Grundy isn’t recovered. Or you have a super big lack of trades. So, um, more useful dodgy advice…..holding CCJ for three rounds and then trading him to Dunkley R18, Dunks goes for 120, CCJ at 85, is a total of 975 points….

I am time-zonally challenged.  When Cow Talk goes live I’m probably asleep, so replies from me may take a while.