So, time for my team reveal. Usually this is a challenge because of my not having a firm team. This year I have ended up with something pretty table for at least a few days, with only cow issues left.

My normal approach is to start with cows and then go from there. This season I tried that but cows have been so hard to figure I ended up using the lack of defense cows as a starting place and the lots of cows forward and in the mids as a guide to how many Guns I would need on each line. Then, as what cows look good and likely selected ended up becoming clearer I filled in to maximize them, even if it meant fiddling with the Guns. Need the good cows! If only we knew who they were…..

The main issue I struggled with was trying to stick to just three Guns in the back so I could get four Guns in the mids. I just talked about rule 42 in yesterday’s post about Guns and Cows. To stick to that, I have to have 4 Guns and that means giving up a little elsewhere.

Defense:  The Guns: I really want Short and expect him to do well with Houli retired. Whitfield is just priced too low for what he could do and so I have him. He is a little fragile, but, He is just too cheap and well owned to ignore him. I had wanted Lloyd for D1 and then went down to Crisp, and have ended up at Ridley. Just too much need for money elsewhere. I’d rather have waited on Ridley, but, I do think he will at worst do a little below what he is priced at, and could so a lot better. It helps that I like him, and so I’m less stressed about being stuck with him that I might otherwise be.

Quick break in the narrative. I decided that this year I was not going to take any player that I felt bad about taking, and I would only take players I didn’t feel good about if there were clearly strong choices. I am also doing what I think best no matter what others do. As long as I am ok with it then that’s what matters.

So the Cows: I have the ones I think are best as of now, with changes as needed. Not a lot of cash, but I also have most of the expensive ones. Chapman looks the best I could find to get to five cows. He is more speculative than I like but on the other hand all I can find out about him is positive. Certainly can be downgraded easily.

Midfield: The Guns:  Neale is a must have. Can only afford 3 of the big four and took the three I like the most.

The Cows: This is a challenge because fitting in all the players I really want was freaking hard. I wanted both Rowell and Berry, and finally managed to fit them in. Daicos is a must, and I can’t bring myself to go without JHF. Ward looks too good to pass up. Stephens also looks too good to pass up as long as he is named. If not his replacement will be cheaper. Miracle MacDonald  is the only normal-cheap priced mis cow I feel has good job security.

The Rucks:  The Guns:  Grundy is the best and most solid ruck by far. The problem is after Grundy, I don’t like any of the more expensive options that much. I do not like the uncertainty around Gawn. He may be fine. I will not be surprised if he is fine, but I also would not be surprised if he is not fine. Darcy and NicNat have real injury risks. But, once a Ruck/Fwd cow showed up, I decided to bring in English, with the expectation he will do at least as well as he is priced to and probably more. Long term, he could well end up in the forwards where I think he will score more than enough to be good there and he will be available to cover for ruck injuries and I do lick ruck cover. He also may stay in the rucks depending on what happens. Points are points and while the ideal is the top two rucks, if English does well enough and I can get the points elsewhere that’s fine too.

The Cow: Hayes is $102,200 and looks like he will play to start and maybe later. If not a cheap ruck./fwd loop player is not so bad. I really wanted Preuss, even with the R1 miss, but no way to come up with the cash.

Forwards: The Guns: Dunkley is a must have. Butters looks far too good for too little to not be taken. I thought about taking him out several times but I’d hate myself if he does what I expect, so not gonna do it. Just not a good plan. Coniglio is also a must have. Note that he is with the guns because I do not plan to sell him.

The Cows:  McGovern is not expected to be a keeper, be he looks like he will do well and make good money while scoring. Brodie could make a lot of money if he keeps his job. Xerri could make huge money if he ends up the North R1, and I expect will make enough money.  Rachelle looked great in the pre-season and has high job security. Martin is pretty a needed enabler, but who looks likely to be named and if not will be soon. I don’t much like that, but I see no way to fix it without blowing something up I do not want to blow up.

I do have a lot of cows on the high end price wise. Also known as cow-like-objects, these guys are the ones I am not going to shy away from this year if I think they are good picks. This means I do not have enough money in the bank, but I face mostly downgrades if things go south. And they may go south for some of them.

Supercoach Mumma, who for those of you who do not know, won last season, said this about Xerri: “…he is the correction trade everyone will want OR he scores 13/34 and we need to correct him out of our teams”

I think she is not only right about Xerri, but about a lot of the cow-like objects. All the ones I have for sure and probably others. If they go well, people will be correcting them in, and if they choke, their owners will be correcting them out. I do not expect many if any will be so average that their ownership stays the same after round two. I think it is better to have all the ones I like, and risk having to downgrade to someone I missed rather than risk being unable to bring in someone who turns out to be a clear trade in.

As it is I have a total of 12 Guns. This is counting Coniglio of course. I have 6 cows who at least in theory could end up being kept long term, depending on how they and everything else goes. These would be the ones who are not first year players. I do not think any of the really will, but Ziebell, and you never know. But, they should generate good points as well as good cash, and that’s a help.

I freely admit I have not looked hard at my bye structure. I will have to keep it in mind when trading in. This year does not seem to be the year to worry too much about that at this point.

I find it annoying that all my forward/mids are forward, but I expect that to change soon enough.

While I am talking about them a lot, I am really hoping to avoid any corrective trade this year. Probably no way that happens, but I can hope. I at least feel safe Gun-wise barring injury. (no Jinx!)

Here it is all in one place: 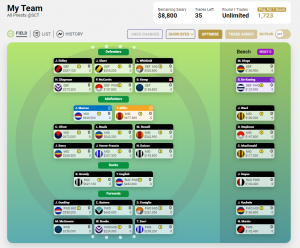