Ninius takes the slenderest of leads into round 22.

with the best score of the top three rivals (2376), Grace has moved to the top of the tree for the first time with the Ninjas losing ground by 39 to slip just eight points into second place.  Previous winner Glenda (2285) lost a little more ground but is still clinging to the bronze medal position.

Andrew obviously used last week’s little sledge to spur the Snipers to top score this week. 2538 was one of only two scores over 2500 and 162 to the good in the father daughter side challenge thisweek. Liam was the other, smashing out a 2507 for his team 2Ezy@sct.

DR’s tech team continues its late season charge with third spot and a great 2461, ahead of a pair of 2412s for BogEyes Ralph and Technicoolz. Abel’s Axes, 2407 and Mr Plow(man) 2403 rounded out the top end of the list. Good to see last year’s champ not giving up despite being further down than he’d like. Chips Ahoy was right up with the top teams this week with a creditable 2397. Great dedication Chips 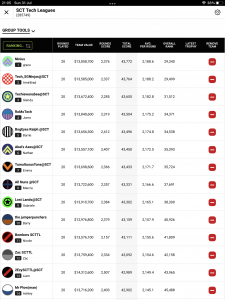