Welcome all to the first official “Fallen Premiums” of 2022. While the season is still young, the typical format of looking at players that have dipped in price and have a low break-even isn’t entirely possible yet. Instead, we can use the same logic and look at who is viable for those that  want to sideways trade this week. 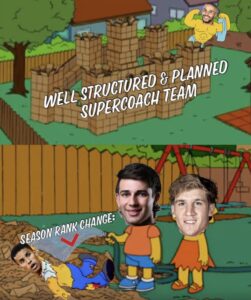 Tom Green (GWS, 502.4k, (+$72.4k), 139 AVG, 45 BE) another monster score for the GWS bull! (). Tom Green has truly ascended to another level this season. There are definitely shades of Clayton Oliver with Tom Green’s play this season (). I’m also reminiscent of Clarry’s second season where he averaged 112 points. However, in comparison to Oliver, Green has been in the AFL system for an additional season and has 10 extra games under his belt. With the added experience, could Green one-up Clarry and push for a 115-120 AVG?

Dylan Shiel (ESS, 361.1k, (N/A), 100.5 AVG, 13 BE) two games, two tons for Shiel along with a healthy CBA load, with 19 (61%) v Brisbane in round 1 & 14 (50%) of the CBA’s v Melbourne this past Friday night. With Merrett set to miss at least the next 5-6 weeks, you’d have to think this is a defining opportunity for Shiel to find his footing back in the guts. He definitely took his chance and ran with it against the Dees, being instrumental in the mini-comeback they attempted in the last quarter. If he can stay on the park, it wouldn’t be out of the norm for Shiel to average 100 odd until Merrett returns. Should be able to make some decent money during that time as well (if he can stay on the park…).

Tim English (WBD, 521.9k, (+39.3k), 124.7 AVG, 58 BE) a monstrous effort for English on Thursday night, 152 points in a round where not many premiums were cracking 120! 69 ruck contests, 10 hit-outs to advantage, 8 clearances, and a total of 52% of ruck contests won. With Stef Martin yet to return, we don’t have a complete understanding of Tim’s ruck-load. However, with the form he’s currently finding himself in, it’s looking like it won’t affect him too much!