So, for example, while an inside mid’s scoring pattern tends to look something like this: 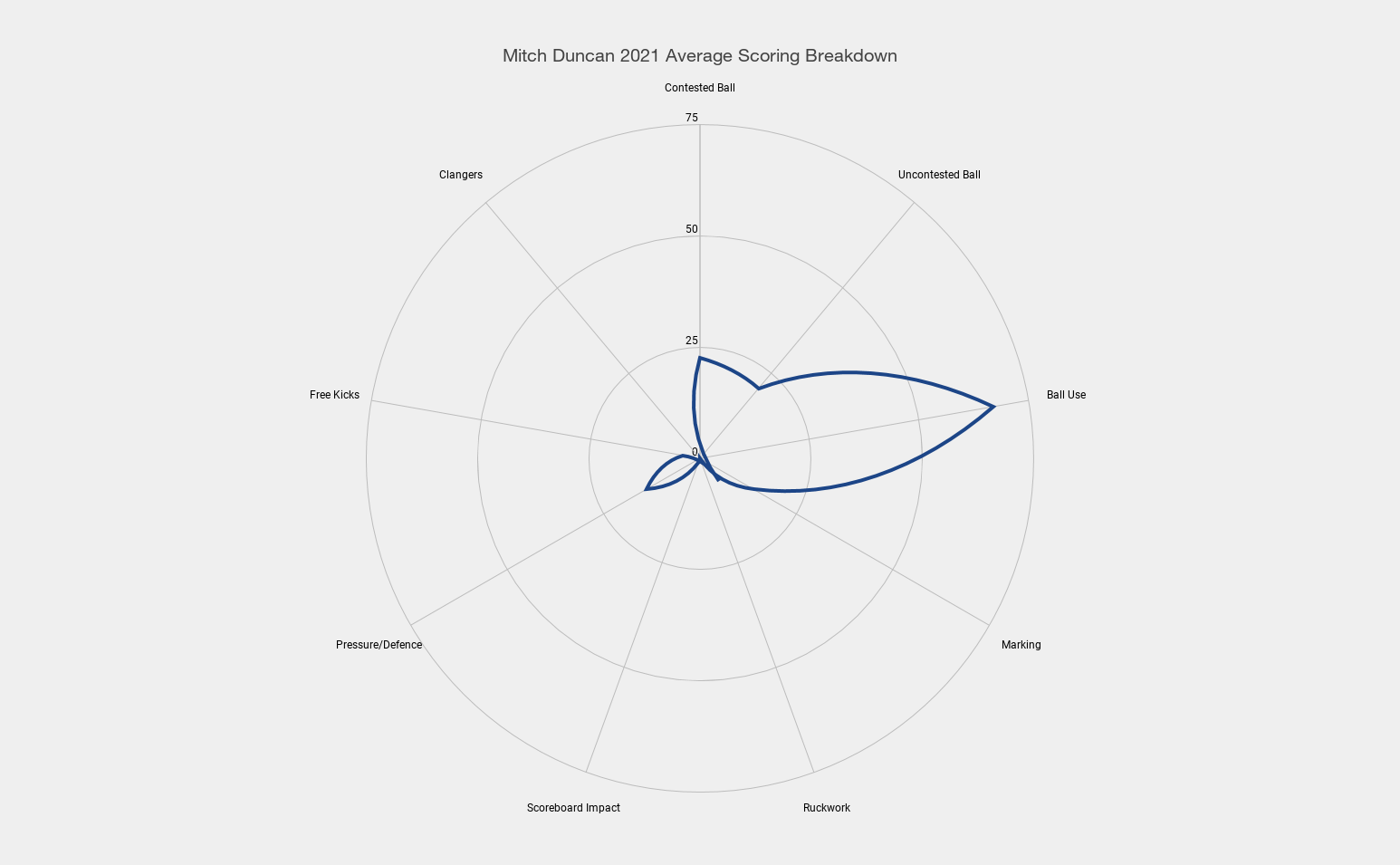 Moving into the backline, intercept defenders will score from marking: 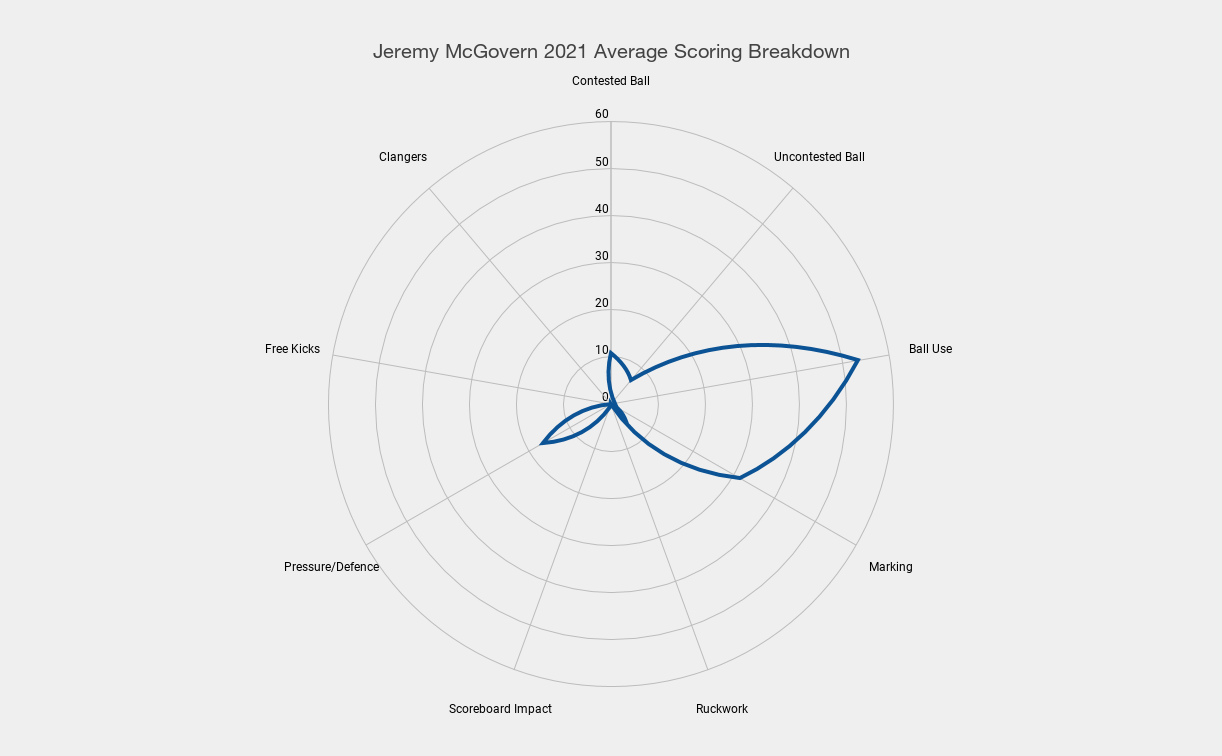 While seagull defenders are basically outside mids: 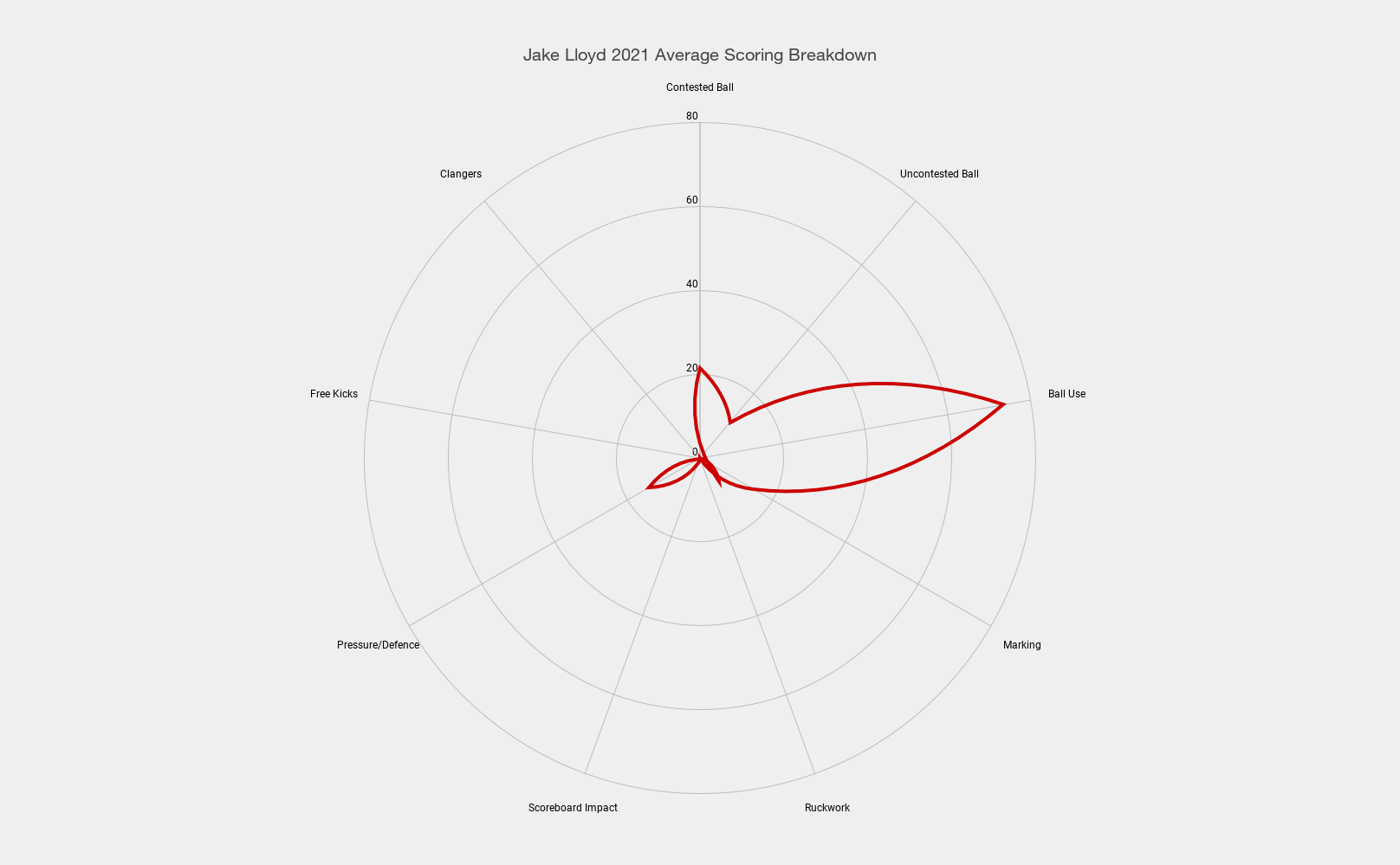 Lockdown defenders, by contrast, tend to have it a bit tougher: 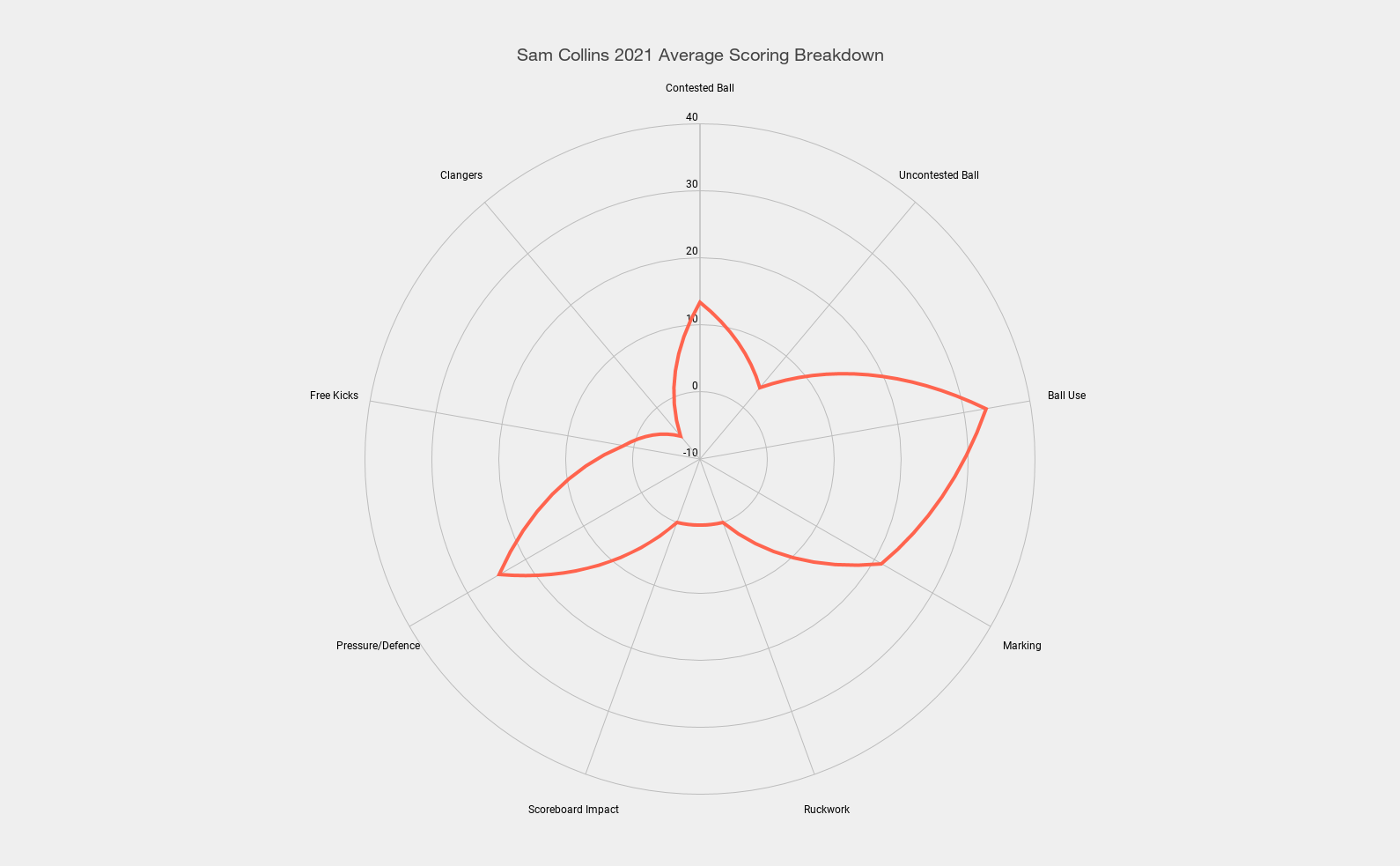 A lot of their work unsurprisingly goes into pressure/defence, which isn’t always rewarded from a SuperCoach standpoint (a dozen spoils is only worth 24 points, for example).

At the other end of the ground, key forwards score by impacting the scoreboard and/or by taking marks: 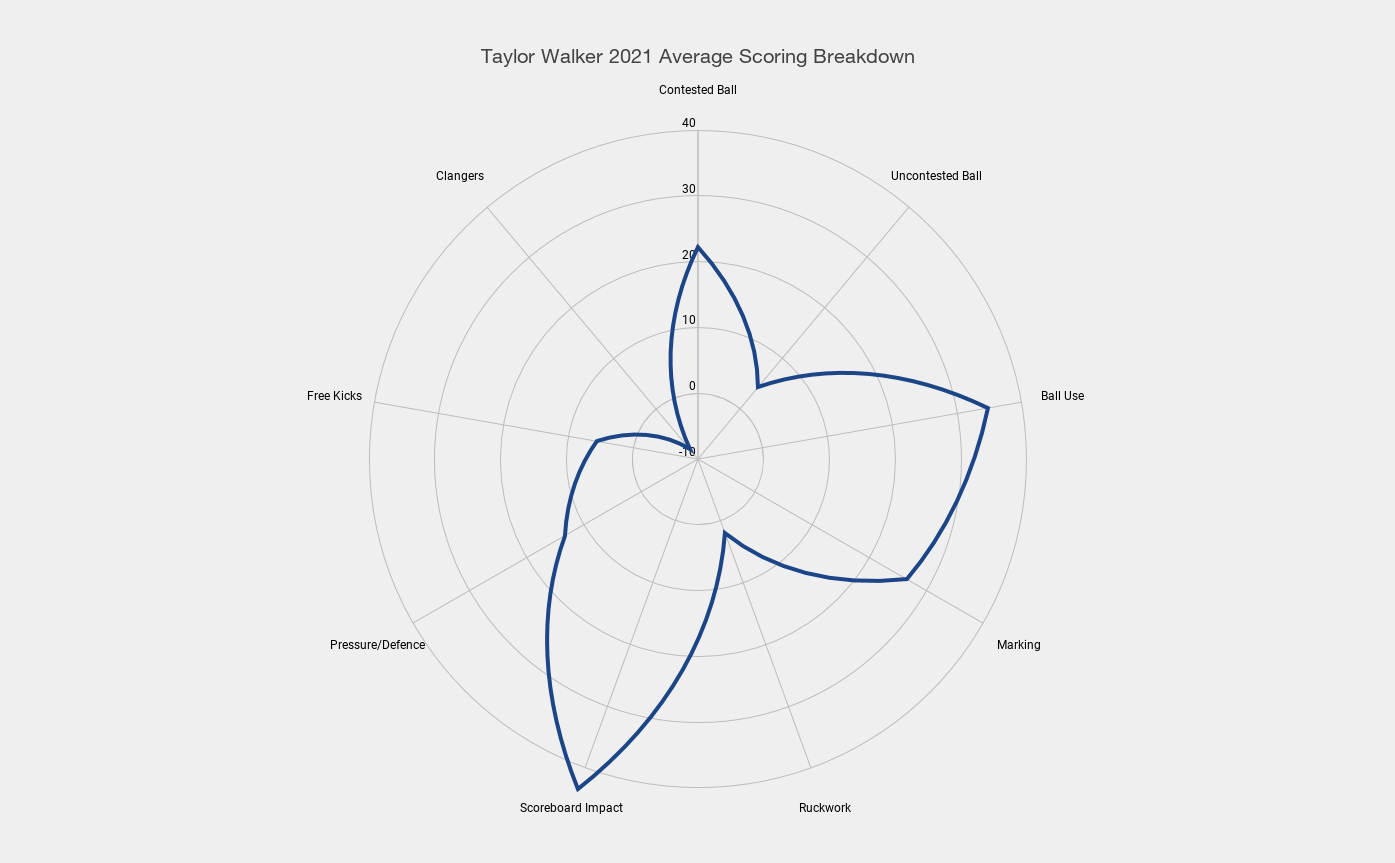 While small forwards tend to be similar, but without the marking game: 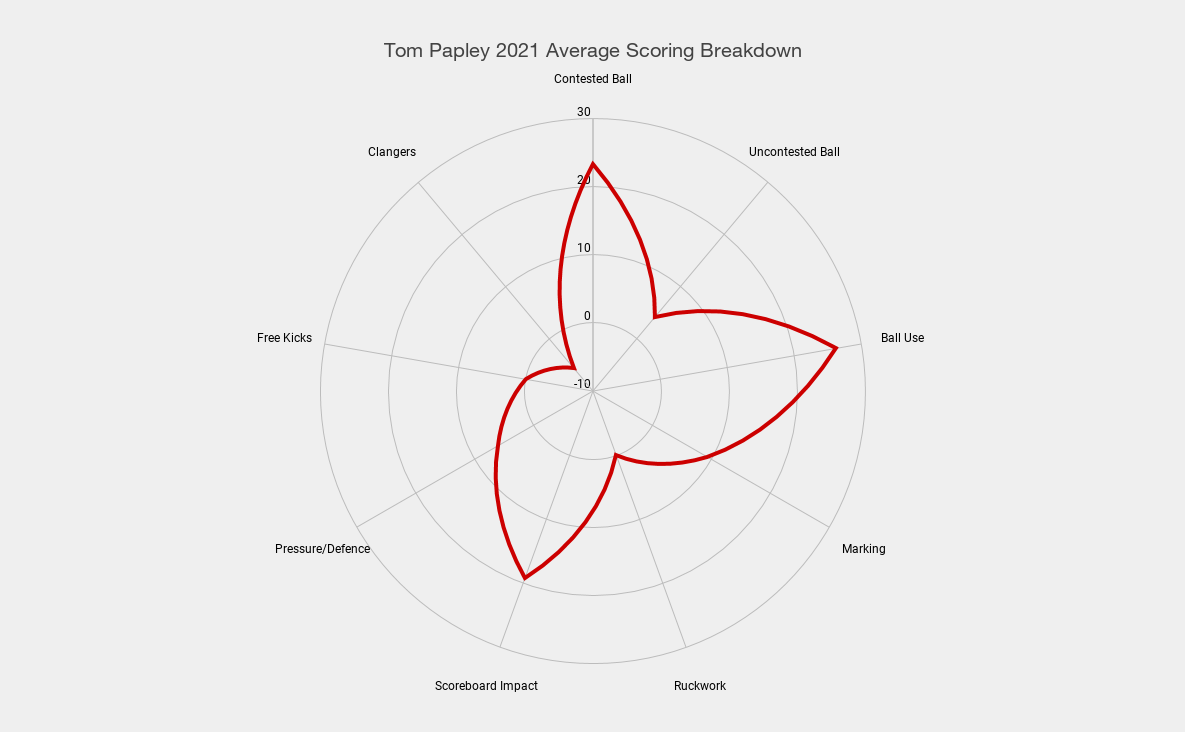 Finally, top-end rucks like Gawn and Grundy (unsurprisingly) get a lot of their points from ruckwork (hitouts to advantage), but are otherwise quite similar to inside mids: 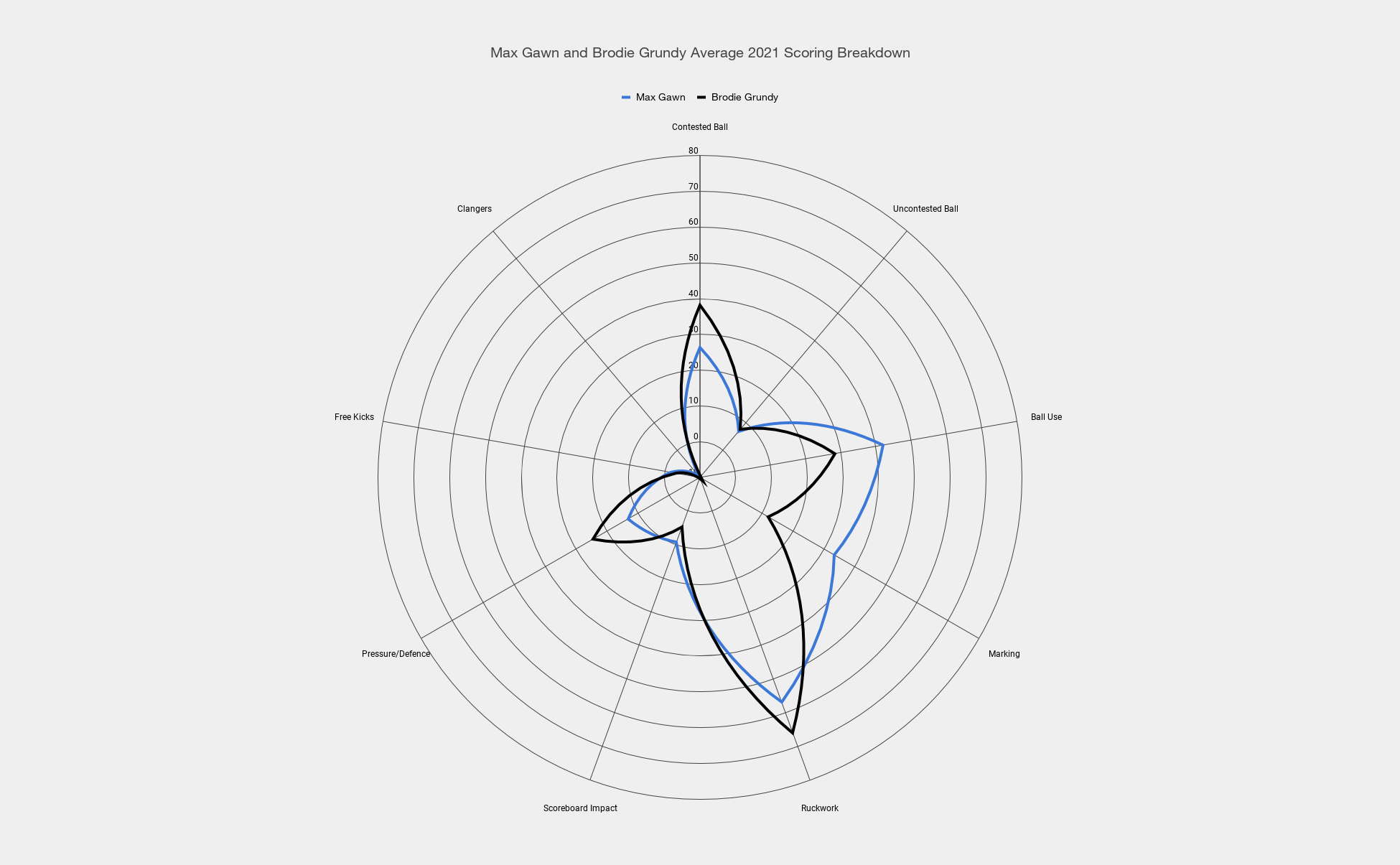 Moving on, a lot of Patrick Cripps’ owners have been wondering where his points have (or, more accurately, haven’t) been coming from.

By breaking his scores over the last couple of years down to their constituent parts, and then plotting them over time, we can go some way towards answering that question:

As you would expect from an inside mid, the driving force behind his scoring appears to be winning contested ball, and his subsequent disposal of said ball.

What is concerning is that his contested ball numbers have dried up significantly since the good old days of 2018-19. Some of this can be explained away by injuries he carried last year (and in the early rounds of this year), and by the fact that raw point allocation was well down last season, due to the shorter quarters: 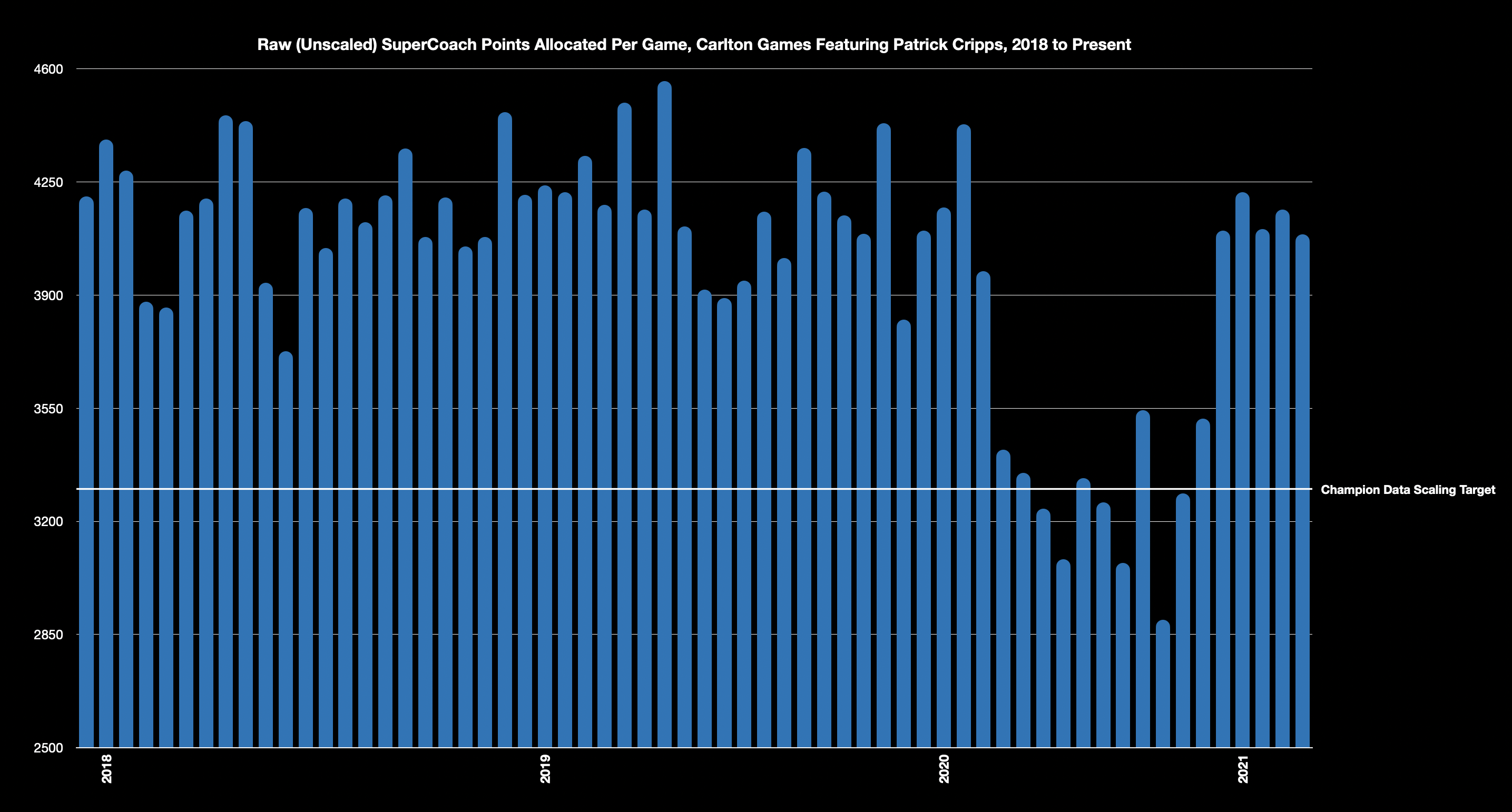 Nevertheless, with the return of full-length quarters this year, and his early-season niggles seemingly behind him, his contested ball numbers still haven’t gone back to anywhere near their 2018/19 levels. It’s early days, of course, but one can’t help but wonder how much this is caused by the Blues having a more even spread through the midfield now (the Carlton midfield of 2018/19 was basically The Patrick Cripps Show). That’s not something that tends to cause, for example, the Bulldogs’ mids any issues, but it really is uncharted territory as far as Carlton is concerned.

In somewhat more certain (and positive) news to finish us off, Caleb Daniel and Jordan Ridley are both set to fall in price a bit, after each dropped a really low score in their last game.

I’ve assumed that Ridley will immediately revert to scoring 130s, and Daniel 100s. This might not happen, in which case their prices will fall further, but I find that if you’re sufficiently conservative about these sorts of assumptions, any surprises down the road will tend to be positive ones.

3 thoughts on “Uncharted Territory – Round 6”