Sorry, that’s my imaginary interlocutor trying to yell “Heresy” but I got tired of that so had to take “measures.”

Oh gosh, I doubt they wanted to do that, the images that could bring up!

Why, Pulp is good! Pumpkins have pulp, along with seeds!

A conversation I am happy to have turned to pumpkin seeds, wonders never cease.

Anyways, This is the Week Of Doom, in which I do the first set of cow projections. This year it is extra doom-y, because I have included a lot of cow-like-objects.

Which some might consider heresy, but this year there are a lot of them and a lot of people own them, so I think it is worth doing them.

Until you figure out how much extra work that is

Well, yeah, we’ll see. I think it’s worth trying though.

Anything to talk about other than cows and heresy?

Another thing is that Cow-pound interest also applies to cow growth, in that it is not always worth waiting another week to make more money. Often you are best off taking the money now and using it rather than waiting for later.

So a negative change is bad?

Yes, right! It means you are making so little cash from the player that you are worse off by waiting.  You could just eyeball that and if you are waiting for a price drop or something then you still might be better off waiting, but I find it helpful, so I include it.

And that timing on that is different?

Yeah, downgrades top out in value faster, so I have both sets of numbers.

Which will be imminently below?

Lachie Young: Came in very early in the game as the injury replacement and put up his second best score.  He has good money left to make, assuming he keeps playing. 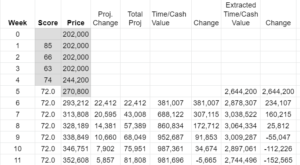 Jordan Butts: The Rule of three says next week will be his peak from that 95, but really he could put up another good score and go higher from that. With seemingly good job security, he might be hard to trade out right now. 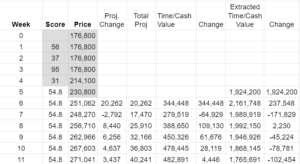 Nikolas Cox: Wow, did he avoid being a trade in target after round 2! Bastard. Looks to have good money left to make, and another 90+ score will mean even more than projected from his season average. 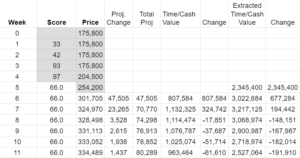 Jack Buckley: Darling of the tech league.  Looks like he could make over $100k, and maybe more if he keeps up his last two weeks form, or even has one big score. 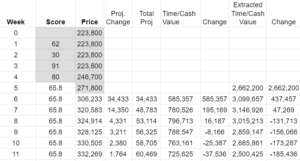 Jordan Clark:  Scored well week one with Danger feeding him. (My opinion) and slower ever since. Always a selection worry. Really could use that one big score, or maybe he’ll pick up with Danger back. 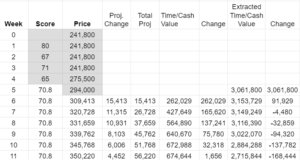 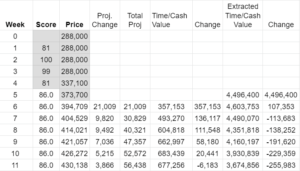 Changkuoth Jiath:  Could be Jordan Ridley v2.0.  If not he will still make bank for his owners.  Still worth bringing in if you think he can keep up a 95+ average, which sure seems possible. 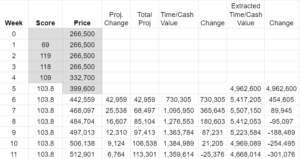 Errol Gulden: That fast start pushed him up but without follow up deeper into the season he will stall out.  Since he put up two huge scores we can assume not a one off, and maybe he do a third. Certainly no rush to trade out.

Sam Berry:  A tackling machine who is looking like a slow burn. Hold and grow and sooner or later he’ll be worth harvesting. 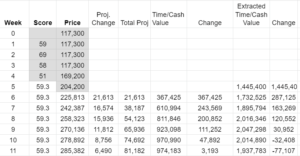 James Jordan: That 24 is really going to slow down his growth. Ugh. Still, having made so little he is probably a long term hold.

Tom Powell:  Not knowing his next two scores, the rule of three says he’ll top out at the start of round 7.  If he puts up more big score round 5 and/or 6 he should go higher past then. 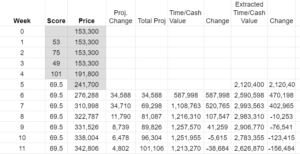 Lachie McNeil:  Wow, clearly a slow hold and hope he has one big score to pump him up. 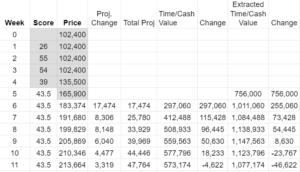 Flynn: Will make a lot of cash if he keeps playing.  Which he should but maybe off and on, which arrgh! 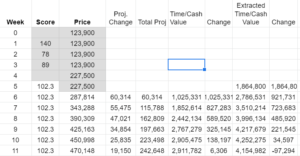 Meek: That 33 hurts. Both because it was on field for many Flynn owners but also in the cash making.  He needs a good score soon, probably two. 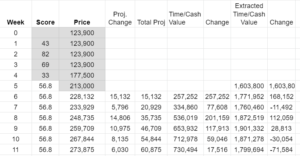 Fullarton: His value may mostly be in his DPP.  Not able to do much as sole ruck, or sort of sole ruck.  May end up a Fwd/Ruck loophole, or could just go up slowly a long time.  All depends on what the Lions need from him.  Doesn’t seem like a bad player. 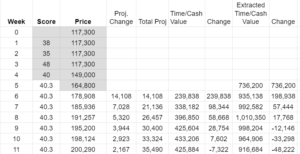 Hickey:  Anyone with the guts to have started with him, well done. He might be a way to dodge a donut this round for those who can upgrade to him. Hopefully from Meek or Hunter and not Flynn. He’d be a keeper if that didn’t mean not owning one of the Gs. 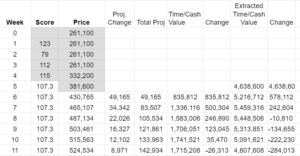 Warner: Might really be the best of the cygnets. Probably not a keeper but there is an outside chance. He may be the safest cow to have on the pitch. 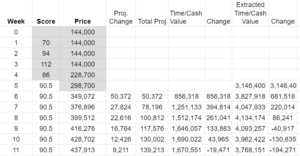 Campbell:  That 29 leaves his three round average after one more round, and so his high Be is a little misleading. If you just went by BE he looks more of a sell than he really is. If you have to harvest him for some reason it isn’t crazy, but I’d try not to if I didn’t have to. 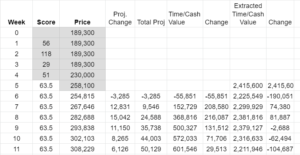 Dow:  I think he is setting a record. First mention in the first cow talk with projections of the year and he is immediately exiled to Moo-ron Mountain.  What a Maroon. What a nin-cow-poop. Blech. Won’t be back until he does something wroth reporting on. A good thing worth reporting on. 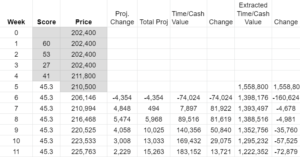 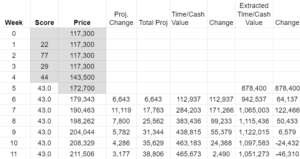 Scott:  Yet another yet another slow burn forward type. 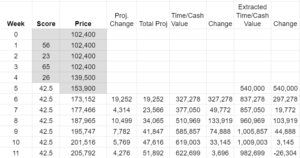 Jones:  Yet another, blah blah blah, forward type whatever. 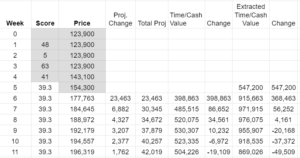 Rowe: A master at having his good score while we have him on the bench. Medium burn forward it seems. 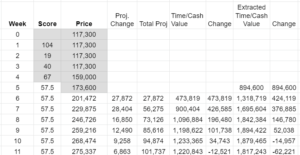 Ziebell:  The Z-man has already made close to $150k, and looks ready to make lots more. Of course if he is a keeper than how much he makes won’t matter.  At his current price he would be a fine value forward if he keep up a 95+ average.  My guess is he’s a keeper until he gets hurt, which isn’t certain, and then maybe sideways to a different unhurt premium. 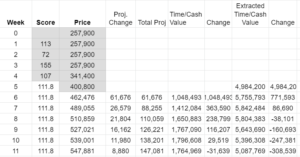 Impey:  A lot like Ziebell, but not quite the same average and cheaper.  Even if bought at this price he could make $150k with a big score. And a keeper possibility. 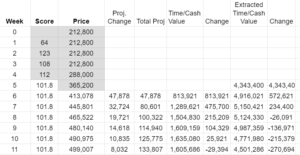 Atkins:  Not quite good enough to bring in now, but a great starting pick. Rule of three says he could be done after two more rounds, but, he could keep scoring well and go past that. 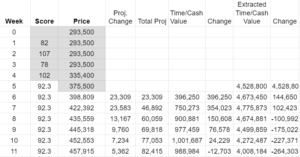 Fantasia:  Looks like a great candidate for the 2021 Post Round Two Admiral Akbar award. At this point, you could give up and cull him if you have to use that cash, or you can wait until he kicks five and tons up again, and then dump him three rounds later.  Won’t take much to go from him to Impey or Ziebell…. 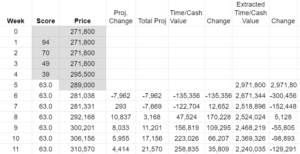 Daniher: Someone cut the thread, and the sword dropped.  Not as bad as Fantasia. Going to be hurt by that 34 if he doesn’t score big to counteract it. 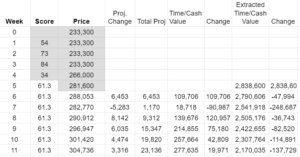 I have almost certainly missed someone or messed something up. Please let me know in the comments.  I mostly did not do guy who look not to be playing this week and have only played a few matches. Usually I like to get four weeks data, but for some important players I made an exception.

Dodgy Advice:  Just because a player has had a price rise does not mean you can’t bring them in. All that really matters is what they cost and how well you think they will do. Past prices just don’t matter. Yes it is annoying to pay overs, but, that is no reason to pass up someone good.  Sometimes we get the info we need one round later than we would like, but having gotten that info, no reason not to use just because of it being later and less good. Sometimes we need to take good enough.