So, upgrade season is just around the corner. You can tell because the decorations are already up and the upgrade carols are playing at the mall!

Firstly, if you have not read this, go read this.

I think it is dead on and way smart.

But, upgrading, yeah. I was thinking about this and I noticed that the stuff I thought about kept having  valid yet opposite, um stuff. For example, fast points good, but don’t go too fast on cows who are not ready.  Don’t make overly emotional decisions but get the players you really want. It’s like what advice we need all depends on the exact situation. Which it probably does.

I’m gonna list some stuff. None of it is new, but I’m saying it anyways.

Sideways trading dodgy rookies is often not worth it.

Often the best thing to do with a cow is nothing, because they are not worth a trade to deal with.

If you don’t trade a guy out his price does not matter.  Like May, I have him, and I plan to hold him, and so what if his price goes down and then back up?

Guys who have had really bad scores will hit their low price three rounds of play later. Two more rounds of play, since one will have already been taken into effect.  Those guys can be great bargains.

Upgrade to guys you plan to keep and are ok keeping for the rest of the season.

Don’t sneer at guys who aren’t going to be top 6 or 8 o r 10 or whatever. Nobody gets an all top player team.  Getting in some bargains helps you afford top player in other spots.

Ok, yeah, so some stuff. But anything new or new-ish?

Their previous moves. Because they don’t matter.  The best move might be to get in someone they traded out already. When we make decisions, we tend to think about stuff like our past moves, because, well, people do that. But really, the best thing to do is completely independent of what your previous moves were. The only thing that matters is the current situation, just like if you were looking at someone else’s team with no idea what they had done in the past.

Thank you. I shall survive the excitement and suspense now

The don’t look back thing also applies to moves you didn’t make.

If you did not bring in a cow before their first price rise, that is a move you didn’t make. But, it could be that bringing him in after his price rise is still the best move available now.  If it is a good or bad move is completely unrelated to past price rises or drops, just the current price and breakeven and situation matter.

So, the ideal manager would be someone really good at Supercoach, who then ended up like that guy from “Memento”, who had no ability to make long term memories. He could look at a team and figure it out with no bias, even if it was his own team!

In a way yes….I’m sleeping with a helmet on.

He said someone really good at Supercoach, you have nothing to worry about!

Shhh, I wanted to see him sleeping with a helmet on.

I was angling for a pumpkin seed reward for messing up your cruel if amusing plan.

Well, looks like someone is getting some pumpkin seeds!

Anyways, if you should bring in Neale now, or May or Daniel in a few rounds is unrelated to if you traded them out or not.  Maybe it would have been better not to, maybe it was right to have traded them out. Either way, when it is time to figure out who to bring in, your past with the player does not matter. 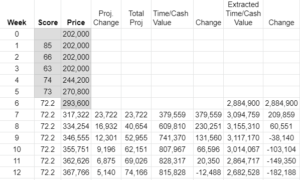 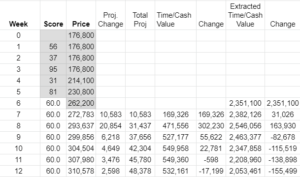 Nikolas Cox: Owch! That 39 means he either puts up a big score again this round or tops out. 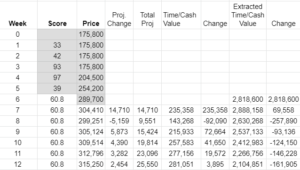 Jack Buckley: Happily keeping up the solid scores and making money. May be close to a top, depending on his next round score.  Of course he has been pretty decently scoring so may be needed on field for that. 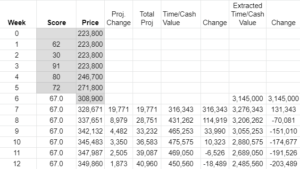 Heath Chapman: His 54 last round was a disappointment to his owners, but odds are he has a lot more money to make. 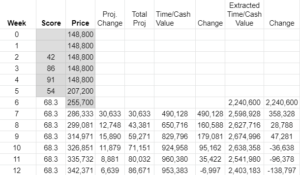 Jacob Koschitzke: Joins us after a fine score last week, saving  many from a donut.  He has turned him self into a hold with a good chance of making enough cash to be worth culling. 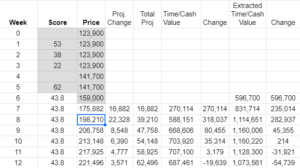 Jordan Clark:  Did not play 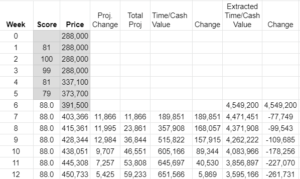 Changkuoth Jiath:  Last Week:  “Could be Jordan Ridley v2.0.”   This Week: Yikes, please do NOT be Jordan Ridley 2.0 thank you, there have been more than enough injures in our backlines.  Did have the off game the doubters were expecting but still a perfectly good hold and far better than a cows on field. 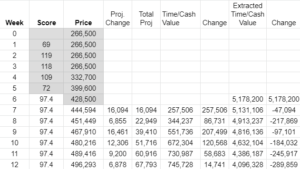 Errol Gulden:  He has the potential to make a LOT more cash.  As long as the Swans rest the Cygnets one at a time, I’d love him to get a break and come back with another ton.  Nobody puts up two 135+ scores without the potential to ton up a third time. Or a fourth time.  Sam Walsh scored over 110 five times as a rookie in 2019, with a 103 for a sixth ton.   I am so holding him and playing him on field until he looks to have topped out for reals. 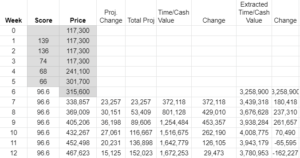 Sam Berry:  That 31 is going to put the slow into the slow burn. But, before you trade him out, he had 12 center bounce attendances last week (46%) which implies good things for his future.  If you have to trade out a cow this week, he might be the best of the lot to risk losing, but that’s far from a needs gone. or exile to Moo-ron Mountain. 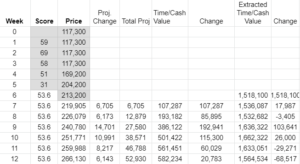 James Jordan: Apparently the 24 was due to a a role change from May’s injury. Coach said he’d go back to normal and sure enough he went back to normal.  Probably one of the safer cows to field, and again, too much money to make to get rid now. 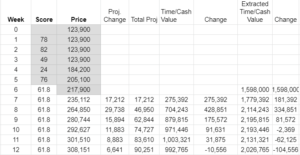 Tom Powell:  Another nice score after his ton.  Another guy who both has more money to make and feels reasonably safe to have on field.  Norf sure needs to play him, and every chance he tons up again. 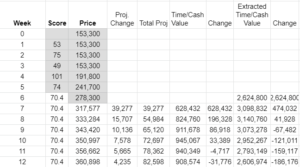 Lachie McNeil:  While he is not putting up big scores, Bevo seems happy to keep the puppies in the 22 given the 5-0 start. I suspect they are playing the roles he wants, and doing them well enough.  Slowly but surely rising in price, and it feels like a waste to get rid now. Anyone owning him must have expected a slow burn, right? 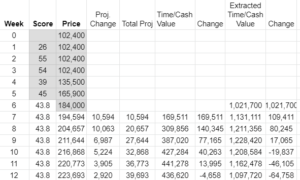 Flynn: Did not play.

Meek: Did not play.

Fullarton: Did not play.

Hickey:  Played, but won’t again for a long while. Bugger. Made $40k and scored 87, which was better than a donut, but not a lot for a trade. 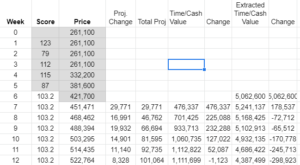 Warner: Last Week:  “He may be the safest cow to have on the pitch.” This Week: Ok, I jinxed him, but he is still probably one of the best cows to have on the pitch.  Like Gulden, he looks far to good to cash in early. We do not get that many cows who can score decently and be fat and juicy at their bye, so don’t waste those few we get. 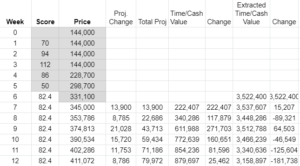 Campbell:  Has not done so well since the 118. Lower TOG, so I wonder if he is just tired.  Memory says cows often slow down lots after the first two weeks and I’m gonna have to look into that. We know lots of players do, partly from random distribution of scores, but lack of fatigue and nagging injury helps I expect.  If he does get a rest, maybe he’ll be all tonning up again? Ok, maybe if he has a rest monkey’s will fly out my…Jordon…  Another cow you could trade if you had to, but I am not sure I’d trade to be rid of him.  Probably best with the “E” though. 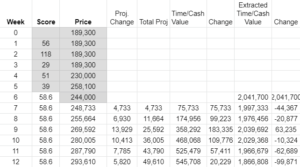 Brockman:  Did not play

Scott:  Huh, see the McNeil comments. They are shockingly similar. 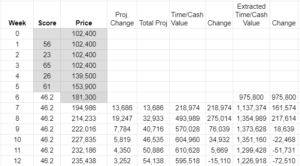 Jones:  Joining Dow on Moo-ron Mountian.  He played but….look, if you have him, then you might as well hold hoping for a big score since you will get so little for a trade, but blech.  Remember Noah Balta? Hold on and hope. Meanwhile, he and Dow can go play patty cake or whatever together

Rowe: He seems to be turning out pretty well. Could go big or small at any time, but if you play him on field every week he has a nice average so far. Far to much cash to make soon to trade out now. 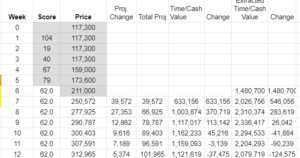 Ziebell:   Has a higher average than Grundy for far less.  Yeah, if you don’t own him you are paying more, but, he is still a bargain.  At some point I may give up tracking him because he is looking more and more like a top 6 forward, and a weekly “Why would you sell him, are you nuts?” would be boring. 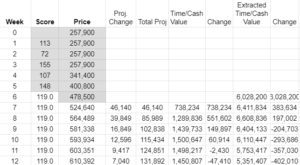 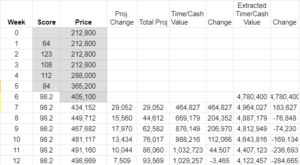 Atkins:  A very unfortunate 57 last round. Of course if he follows his pattern he tons up again, since it is an even numbered round.  He’s sort of the Start Trek movies of cow-like-objects.  There’s a sentence you don’t read every day. 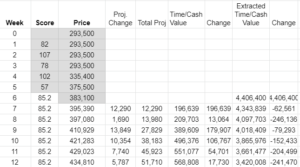 Fantasia:  Hold and hope for him to copy Daniher and go big enough to make cash. Of course with 4 goals and 4 behinds in round one he only scored 94, which in a way was a clue. 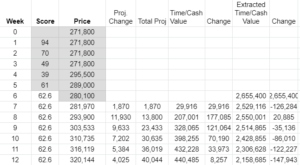 Daniher: Last Week:  Going to be hurt by that 34 if he doesn’t score big to counteract it. This week: Well, he sure went big!  He is now on rule of three watch, and will be ripe at the start of round eight if he does not go big again before then. 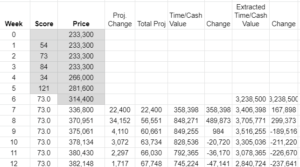 Dodgy Advice:  If Flynn wasn’t playing I was going to suggest getting in Mummy as R3 to go with his R2. You’d get one of them for sure, right?  Could go right from Hickey. But, Flynn was named so that move can be put off a week.

Instead, I’m, um, out of Dodgy Advice.

Saved by the Hamster! Thanks little mate!

Big huge thank you to  Fantasy FOMO, who has been a Max Gawn sized help with data and analysis. I’ve barely just scratched the surface of it all, and I’m looking forward to diving deeper and sharing the results. He has a YouTube channel with his own data driven analysis, which is totally worth checking out: