This week we’re going to talk about the Hamsterberg uncertainly principle. So, turning this over to To-mini-therion .666, my hamster.

Imagine you have a box with a cat in it, and the cat might be alive or dead depending on radioactive decay or something like that. That is a badly designed box because there is a 50% chance the cat lives, and as a small animal that cats find fun to hunt, I like my cats dead thank you very much.

Now, imagine you have Zaxc Butters on your team.  Is he this Butters? The small wimpy one who gets grounded? 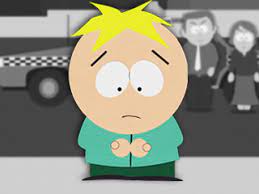 Or is he this Butters, better known as Professor Chaos Ball! Getter of hard balls, kicker of goals, tackler of people on the other team mostly! 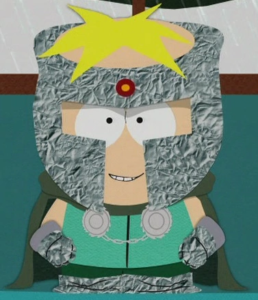 Was that an Evil Laugh?

I’m pretty sure that was indeed an evil laugh.

I suppose we need to get him monologuing

Yes, I shall explain my plan. You see, it is upgrade season. The time of one up and one down, except for this year when we have boosts, but anyways,  trading Butters now comes at the expense of reaping cows and sowing the fields with the cash we pull from their veins and growing some nice guns for us to keep. Every luxury trade delays the building of your team and puts you behind the people who are actually upgrading during upgrade season!!!

So, just leave him alone?

Yes! Him and all those other players who you might want to do something with, but really need to be held which we focus on upgrading and getting cows off the field and bringing in fallen premiums!!!

What if he loses more money?

From where he is now? Pshaw! He’ll most likely go up some at some point. He has two, not one, but two scores of 130 or more so far! Even if he gets grounded he’ll score well enough to stay around where he is now.

So, for him and all those guys who aren’t cows but we want to fix, just wait until after upgrade season?

This is the way! Did I stutter!?

Noah Answerth: Apparently he did not like Moo-ron Mountain, as he scored a 100. Suddenly he’s back, at least for a few more weeks. 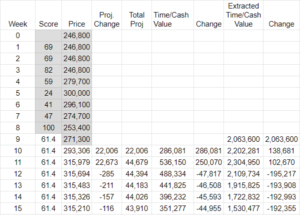 Jake Bowey: Looks like a trade out. He could certainly ton up again, but at this point it would make sense to go up or down from him, it being upgrade season and all. 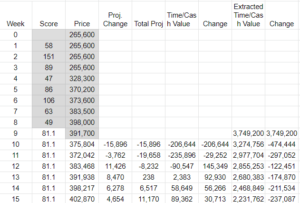 Heath Chapman: This guy may be the biggest troll I can remember. Ends up missing two games, almost certainly traded out by most of his owners and then comes back with a 136. There was a reason he was in a lot of teams and that was it. 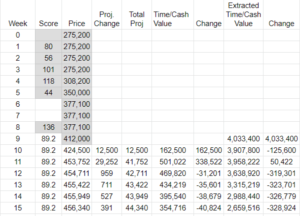 Sam De Koning: While a 77 isn’t huge, it will really help his cash generation for a few rounds. We hope. 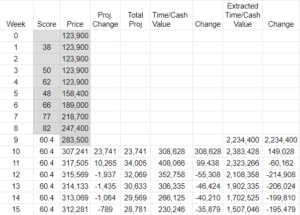 Josh Gibcus:  His average really is 66, that’s not an error.

Anyways he is for sure not a long term keeper, can go now or probably next week. Could always ton up again, maybe. He did it once…. 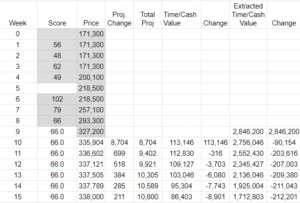 Mitchell Hinge: Back with an unexciting 54. If you held him this long, you might as well let the 37 go out of his three round average and see if he can score well again. 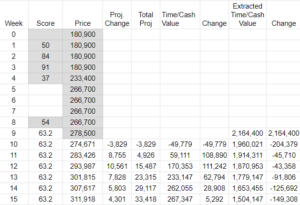 Patrick McCartin: Ohhh yes. Two more rounds of growth, probably. He might even keep scoring well enough to get us to the byes. 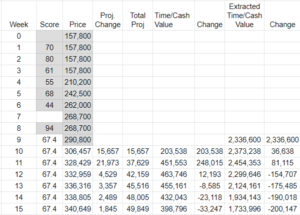 Nathan O’Driscoll:  Sure would have been nice to get those tons later in the season when they would have shot his price higher. As it is, he is now just slowly creeping up. Can be sold. He might ton up again, no reason he can’t, but hard to count on that. 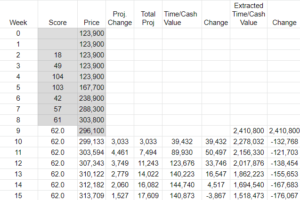 Jarrod Berry: He is just not doing what his owners had hoped for, and now his scoring has really dropped off. Ripe for upgrading. 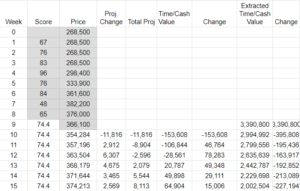 Jye Caldwell: The 91 stopped him from losing cash and gives him a good shot at a little bit more. 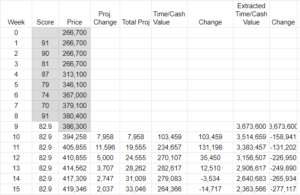 Nick Daicos: Feels like someone who gets traded out R14.  Still slowly growing. 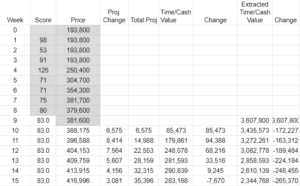 Jason Horne-Francis:  Feels like someone who gets traded out R14.  Still slowly growing. He is, however, playing like his doubters though he would. Still, once big score and maybe he makes the cash we hoped for. 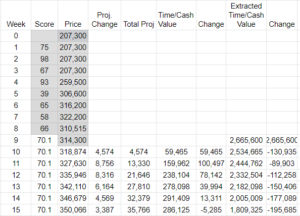 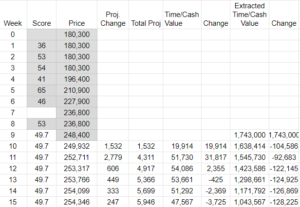 Hugh Dixon:  Did not play

Sam Hayes: Lots of money to make. No rush at all to trade out. Could be important bye cover. 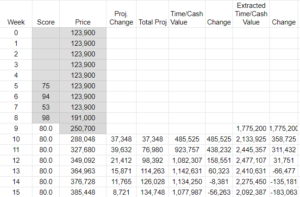 Braydon Preuss:  Looks a lot like a keeper to me. I would be slow to trade him out. 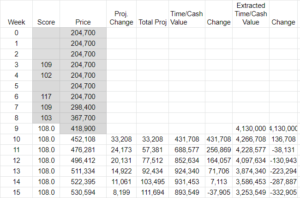 Will Brodie:  Yeah, feels more and more like a keeper to me. Very much a luxury trade if you do anything with him, and why would you really? He can’t be the thing most in need of fixing. on most teams 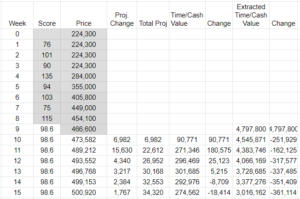 Charlie Curnow: Last week: “Might be ready to cull at the beginning of R9, but could put up another ton and extend that.”

This week: Holy cow! He extended it! Odds are very high his season high value will be at the beginning of round 11, so plan to trade him then. 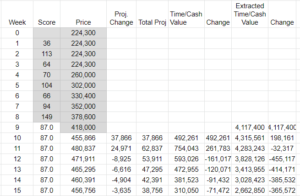 Jade Gresham: Ok, maybe a cheap gun, or maybe g a good cow. I’d be temped to hold and get that 55 out of his average but on the other hand, upgrades must happen. 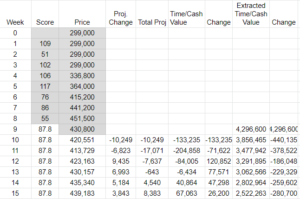 Connor MacDonald:  Sigh. He looks like a useful Mid/Fwd swing backup. He may never be worth harvesting. 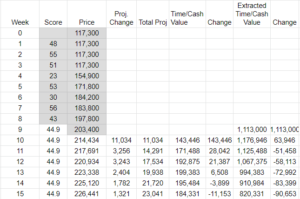 Finn Maginness:  Sigh. He looks like a useful Mid/Fwd swing backup. He may never be worth harvesting. 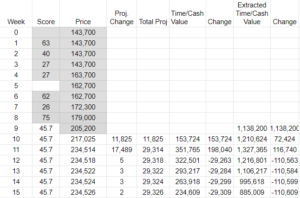 Nicholas Martin:  Lots more cash to make. So hard to trade out until forced. He will need to go, eventually, but no rush. 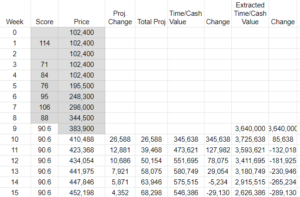 Patrick Naish: This may be the week to trade him. That 46 will hurt for a while. 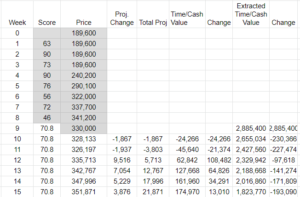 Josh Rachele: People who still own him should consider waiting for another good score. But, if you need to sell him for cash, then you do, and no worries. 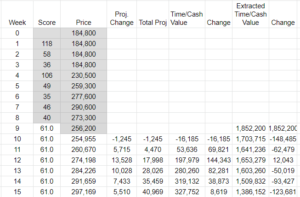 I know I said this last week, but it is still true. We may well have too many downgrade options next round. Might be a good idea to bring in one a round early.

Has Lachie Whitfield bottomed out….?  I’m going to hell for even hinting at the idea of bringing him in….. 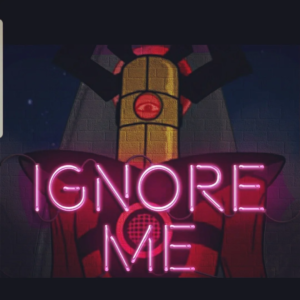